BLACKSTONE, VA.—Near the end of his town hall meeting last week in a rural Virginia county, Republican congressman Dave Brat tried to defuse the tension with some comedy.“Anybody got a good joke?”A couple hundred people who couldn’t... 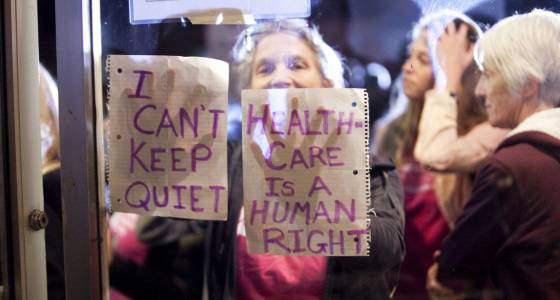 BLACKSTONE, VA.—Near the end of his town hall meeting last week in a rural Virginia county, Republican congressman Dave Brat tried to defuse the tension with some comedy.

“Anybody got a good joke?”

A couple hundred people who couldn’t fit into the cramped restaurant were standing outside on Main St., listening on loudspeakers. Their roaring answer could be heard through the closed door.

Democrats are in no mood for friendly banter. Disturbed by the election of Donald Trump and determined to thwart his agenda, progressives around the country are borrowing a move from the tea party movement that impeded Barack Obama in the early years of his presidency: swamping legislators’ local meetings to pepper them with jeers and tough questions.

Their primary goal, for the moment, is to protect Obamacare, the threatened health care overhaul the tea party tried to prevent from coming into existence. More broadly, they want to show lawmakers that there will be consequences for supporting the president — at very least, being pestered at every turn when they come home from Washington.

“I have no illusions that those of us who are horrified by Trump’s election are going to have something miraculous happen. This is not a battle, it’s a siege. But this kind of event gives us energy. And it puts people like Dave Brat on notice: he may have cruised along the first time around, but this is what his life is going to be like now, every day,” said professor Mary Mullins, 61, a Brat constituent who had not been politically active since her youth.

The movement’s bible is an online manual called Indivisible: A Practical Guide for Resisting the Trump Agenda. Written by about 30 former Democratic congressional aides and posted on Google Docs in December, it provides step-by-step advice, based largely on tea party tactics, on how to get congresspeople to listen.

“The tea party was effectively able to organize locally and play defensive politics to slow federal policy-making to a halt. We saw it work against a very popular president and Democratic supermajorities in Congress, and we thought it could surely work now against a president and Congress that do not enjoy the same kind of mandate,” said one of the authors, Sarah Dohl, former press secretary to Texas Rep. Lloyd Doggett.

Dohl said they had expected the document would be read by their mothers. It has racked up more than 16 million web views and spawned 5,300 Indivisible groups around the country, she said. There are at least two groups, she said, in every congressional district.

Some Republicans, like Utah Rep. Jason Chaffetz, have disparaged the dissenters as paid professionals. Trump tweeted about “so-called angry crowds” that he said are “actually, in numerous cases, planned out by liberal activists.”

Veteran activists are indeed helping to organize a movement some describe as “the resistance.” But Matt Kibbe, president of prominent tea party backer FreedomWorks during the heyday of that movement, said Republicans are still “wrong to dismiss it.”

“Republicans are now accusing these activists of everything the Democrats accused the tea party of in 2009. I don’t think Democrats understood that the tea party was real, and maybe some Republicans don’t appreciate that this is real,” said Kibbe, now president of libertarian group Free the People. “There’s obviously a lot of professional community organizers involved … but you can’t create this kind of grassroots participation. It has to be organic.”

Dozens of Republicans opted to not hold town halls during last week’s congressional recess, choosing to deal with a barrage of complaints about their absence rather than leave themselves vulnerable to a YouTube moment. In the social media era, Dohl said, “we have a unique opportunity now to make all of these events go viral.”

In Utah, Chaffetz, the House Oversight Committee chair, faced a raucous chorus of demands to investigate the president. In Iowa, a pig farmer in a baseball cap warned Sen. Chuck Grassley that he wouldn’t be able to afford insurance without Obamacare. In Arkansas, a woman told Sen. Tom Cotton, her voice raw, that Obamacare was the only option for her dying husband.

Brat, a tea party insurgent who was recorded in January complaining that “the women are in my grill no matter where I go,” chose to have his Tuesday meeting in the southernmost part of his Richmond-area district, a conservative town of 3,500 where the mayor says people care more about NASCAR than politics. But he was greeted with a barrage of skeptical queries on Obamacare, the environment, Social Security and Trump himself from constituents who drove up to two hours to dog him again.

Only a fraction of them were affiliated with Indivisible. Outside the restaurant, as a group of young people chanted “this is what democracy looks like,” a staple of activist circles, 75-year-old Myra Ringuette spoke just above a whisper.

First in line was Kimberly Wyman, 41, an antiques seller who had not done anything political until she joined the anti-Trump Women’s March in January. Michelle Harrington, 69, a retired teacher at her first town hall, held a cardboard sign with an actual grill cut into it and the three words that have turned into one of the movement’s unofficial slogans: “Do your job.”

Kibbe said the town hall activists are “shouting too much,” risking the alienation of people who prefer respectful discourse. But he said, overall, “I think they’re actually doing a really good job.”

They face tough odds with Republicans in control of both the House and the Senate, but there are early hints that they are having at least some success. Alabama Rep. Mo Brooks said last week that the town halls might prevent anti-Obamacare Republicans like him from securing the votes for repeal.

“Because these folks who support Obamacare are very active, they’re putting pressure on congressmen, and there’s not a countereffort to steel the spine of some of these congressmen in toss-up districts around the country,” Brooks told an Alabama radio station.

So far, the progressive activism has largely focused on Republicans. Squishy Democrats, though, risk being swept up by the wave. As California Sen. Dianne Feinstein, a senator for 24 years, told a San Francisco policy institute Friday that she still wants to try to work with Republicans, protesters chanted “resist or retire” — and, naturally, “hold a town hall.”