'I want my name back': man convicted then freed in 1957 Sycamore cold case

The man convicted of murdering a Sycamore girl in 1957 and then freed when DeKalb authorities said they believed him innocent testified Thursday that he is trying to win back his reputation from people who consider him a "monster."Jack McCullough,... 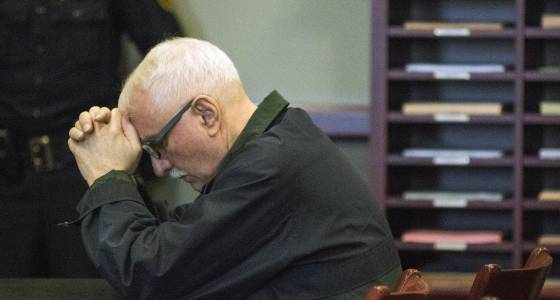 The man convicted of murdering a Sycamore girl in 1957 and then freed when DeKalb authorities said they believed him innocent testified Thursday that he is trying to win back his reputation from people who consider him a "monster."

Jack McCullough, 77, testified for 40 minutes during a DeKalb County court hearing, and he denied any culpability for the murder of Maria Ridulph in his bid to obtain a certificate of innocence that McCullough said will help clear his name.

"I am innocent, and I've been proven innocent. I want my name back. My name has been in all the papers, coast to coast. I've been put forth as a monster, and people still believe I'm a monster," McCullough told Judge William Brady and a courtroom audience whose members included Maria's sister, Pat Quinn.

The judge said he would announce Wednesday whether he would issue the certificate. After the hearing, McCullough said he would travel home Friday to the Seattle area, where he has lived since the 1970s, and would not return to Illinois to hear the judge's ruling.

"I've always had a warm place in my heart for Sycamore. It was a great place to grow up," he told reporters.

But he also said he wanted "justice" against what he called a corrupt system.

The certificate of innocence would allow McCullough to obtain compensation from a state program for people wrongly convicted. It also, McCullough attorney Russell Ainsworth argued, helps McCullough regain his reputation.

"We've seen a presentation of evidence that would make any person in Mr. McCullough's shoes innocent in the eyes of the law," Ainsworth told the judge.

A special prosecutor was formally appointed Monday to investigate allegations that a Seattle police detective perjured herself in the case of Jack McCullough, the man whose conviction for the 1957 murder of a Sycamore girl was overturned last year.

A special prosecutor was formally appointed Monday to investigate allegations that a Seattle police detective perjured herself in the case of Jack McCullough, the man whose conviction for the 1957 murder of a Sycamore girl was overturned last year.

A year ago, McCullough was serving a life sentence, having been found guilty of being the man who approached Maria and a friend as they played on a Sycamore street corner on the evening of Dec. 3, 1957. Maria's disappearance was national news. Her body was found five months later in northwest Illinois.

The case went cold for decades, until new developments led to McCullough's arrest in 2011. His guilty verdict at a 2012 bench trial was believed to have been the longest cold case in U.S. history to result in conviction. However, DeKalb County State's Attorney Richard Schmack, who succeeded the chief prosecutor who won the conviction, said in March 2016 that he believed McCullough was innocent.

McCullough's conviction was vacated and he won his freedom when Schmack dropped the charges against him.

Ainsworth, like Schmack, placed heavy emphasis on FBI reports from 1957, which created a timeline Ainsworth said would have made it impossible for McCullough to have kidnapped Maria.

McCullough said he had been in Chicago that day, trying to enlist in the military, and had taken a train to Rockford, where he interacted with Air Force recruiters and then called his parents collect to get a lift home. The call was made just before 7 p.m., near the time Maria was last seen, Ainsworth said. That information was corroborated in investigative reports, but those reports were ruled inadmissible at trial.

McCullough said his father drove him back to Sycamore that night and dropped him at his girlfriend's house. The former girlfriend, Jan Edwards Swafford, testified via a video feed that she saw McCullough that night.

The other witness for McCullough was Nancy Steblay, a Minnesota college professor whose research has centered on eyewitness identifications. Steblay said it was unlikely that Maria Ridulph's childhood friend, Kathy Sigman Chapman, could have accurately identified McCullough as being the man who approached the girls just before Maria disappeared.

At trial in 2012, Chapman positively identified an old picture of McCullough as being an image of the same man who walked up and introduced himself as "Johnny." Steblay said Chapman's identification, coming via a poorly conducted photo lineup 52 years after the crime, made her identification highly unreliable.

Clifford Ward is a freelance reporter.