Hundreds run into chilly water during the 2017 Polar Plunge (photos) 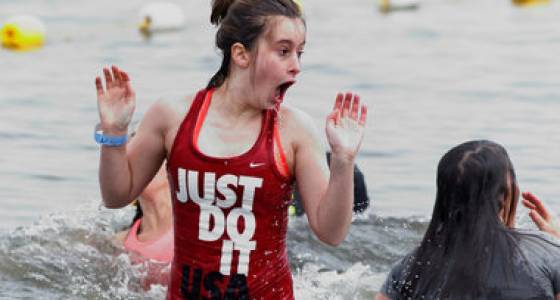 Over 125 teams participated in this year's Polar Plunge, Feb. 25, at Broughton Beach on the Columbia River, to raise money for Special Olympics Oregon.

A member of Special Olympics Oregon said the final tally would not be available for a couple of days, but estimated that donations of approximately $250,000 would be raised, with another $100,000 coming from sponsors.

Marc Hudson, a "super plunger," plunged 25 times and raised $3,150. This was his third year participating. He asked each sponsor to pledge $100 and received money from a variety of people, including Dr. Martens and the Kit Kat club in downtown Portland.

Hudson's 25th plunge came during the inaugural "ColorPlunge", the only plunge event in the world to incorporate color powder. The inspiration for the ColorPlunge is the festival of Holi, a Hindu festival heralding the coming of spring, according to Special Olympics Oregon's web site.

Also taking a dip were Timber Joey and Jack Jewsbury, along with some members of the Timbers Army. Those members raised approximately $3,700, though one member thought a bit more might trickle in.