Returning to the 7-Eleven parking lot where they'd gathered after the nightclub shooting in Orlando, Fla., in June, Chicago's LGBT community again joined in solidarity Saturday — this time to protest the Trump administration's withdrawal of federal protections... 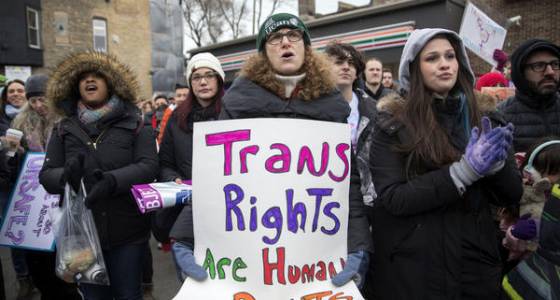 Returning to the 7-Eleven parking lot where they'd gathered after the nightclub shooting in Orlando, Fla., in June, Chicago's LGBT community again joined in solidarity Saturday — this time to protest the Trump administration's withdrawal of federal protections for transgender students.

More than 200 people crowded the intersection of Halsted and Roscoe streets in Boystown, braving frosty temperatures as snowflakes melted onto knitted rainbow hats and multicolored boots. Their glittered signs read "Kids just want to pee in peace!" and "It's not about bathrooms, just as it was never about water fountains."

"We are not asking for nothing special; we are asking for what everyone else has: dignity, respect, protection and justice," said Maritxa Vidal, a trans woman and president of the TransLatina Coalition's Chicago chapter. She stood on a makeshift platform addressing the crowd with a microphone.

"We no longer will be invisible. We are going to be in your faces," she said. "We are here, and we're not going back in that damn closet, whoever wants it or not."

On Wednesday, Secretary of Education Betsy DeVos and Attorney General Jeff Sessions announced that the administration was rescinding a federal directive put in place by President Barack Obama that allowed transgender students to use the bathroom and locker room that matched their gender identity.

The new administration's decision was condemned by advocates for civil and lesbian, gay, bisexual and transgender rights but praised by those who viewed Obama's policy as federal overreach.

A rally in support of transgender rights was held Feb. 25, 2017, in Boystown in Chicago's Lakeview neighborhood. The rally was organized to protest the move by the Trump administration to roll back federal protections for transgender students in public schools. (Erin Hooley / Chicago Tribune)

A lineup of speakers from LGBT organizations around the city, including the Center on Halsted, took turns at Saturday's rally condemning the retraction of transgender bathrooms. The crowd, gathered in the same parking lot where a vigil was held in June for victims of the Pulse nightclub attack in Orlando, cheered when speakers said removing a safe space for transgender and gender nonconforming youths at public schools makes those students more vulnerable than they already are.

When the rally concluded, the crowd began to march north on Halsted and looped the Boystown area of the Lakeview neighborhood, chanting, "Trans rights are human rights."

Katie Slivovsky, exhibit development director at the Chicago Children's Museum, attended the rally with the hope of educating more parents about how to be LGBTQ-friendly. She said she believes children develop gender identity as early as age 2, so it's important that parents allow their children to explore that identity.

The Trump administration announced late Wednesday it has rescinded a key Obama directive granting transgender students federal protections in public schools, though the impact in Illinois may not be as pronounced as elsewhere and many local educators said they will not roll back existing policies.

The Trump administration announced late Wednesday it has rescinded a key Obama directive granting transgender students federal protections in public schools, though the impact in Illinois may not be as pronounced as elsewhere and many local educators said they will not roll back existing policies.

"If they're aware of all these different ways to express themselves, it won't be such a difficult journey as they continue through middle school and high school and adulthood," Slivovsky said.

She said children who aren't transgender should read books like "I Am Jazz" or "My Princess Boy" — brightly illustrated picture books about gender identity and acceptance.

"That way, when they encounter a friend who's maybe expressing themselves in a nontraditional way, they can be like, 'Oh! OK, got it,'" Slivovsky said.

As an employee who works at a museum with gender-neutral announcements and all-gender bathrooms, she finds the rollback of federal protections frustrating.

"It's just so ignorant and so mean-spirited and so unnecessary," Slivovsky said. "A safe place to pee is a must — not an option."