HACKENSACK -- Over 300 people gathered in front of the Bergen County Courthouse Saturday to rally against the repeal of the Affordable Care Act. Crowds packed the steps of the courthouse to protest President Donald Trump's healthcare agenda which includes... 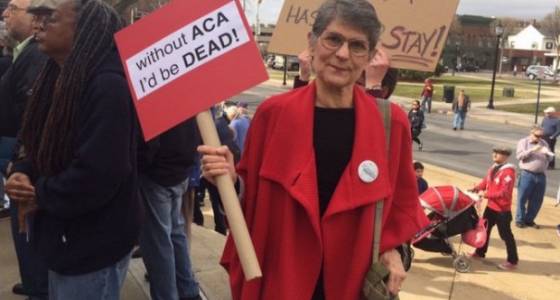 HACKENSACK -- Over 300 people gathered in front of the Bergen County Courthouse Saturday to rally against the repeal of the Affordable Care Act.

Crowds packed the steps of the courthouse to protest President Donald Trump's healthcare agenda which includes the repeal of the Affordable Care Act, the defunding of Planned Parenthood and the privatization of Medicare.

Diagnosed with cancer 14 years ago, Winters said she was able to afford expensive but lifesaving medicine due to her insurance. Winters, a Haworth resident, held a sign that read "Without ACA I'd be dead."

The Affordable Care Act has provided coverage to roughly 900,000 New Jersey residents: 250,000 who get coverage through the subsidized federal marketplace, and another 650,000 who became eligible for Medicaid when it was expanded under the act.

Assemblyman John Wisniewski (D-Sayreville), a gubernatorial candidate, received roaring applause as he told the crowd he would work to bring a single-payer healthcare system to all Garden State residents.

"We know somewhere in this state there is a woman that's having her first child and she doesn't know if she will have health care when the baby is born," Wisniewski said.

Yvonne Dallam, a freelance contractor from Jersey City, cried as she spoke about how ACA provided her with insurance coverage during pregnancy.

"When the bill comes in and you don't have healthcare, you have to make a choice between a son or the house to raise him in," Dallam said.

Dallam, who had to have an emergency C-section and whose son was was incubated for two weeks due to the threat of a collapsed lung, said her medicals bills might cost as much as $5,000 versus $137,000 without insurance.

"We pay our premiums, we aren't asking for handouts," Dallum said.

The Republican-controlled Congress, backed by Trump, took the first steps toward a repeal of the ACA last month.

Last month, Hundreds rallied in Newark to protest the ACA repeal. The Congressional Budget Office said the repeal of the ACA would leave 18 million Americans without insurance coverage.

"I'm here to support healthcare for all, it is a basic human right everyone should have," said Mozeika. "It is a travesty for this country that we don't have basic humans rights that other countries have."