House Democratic Whip Steny Hoyer is calling on governors of both parties to embrace national redistricting reform when they gather for the National Governors Association winter meeting in Washington this weekend.The Southern Maryland lawmaker sent letters... 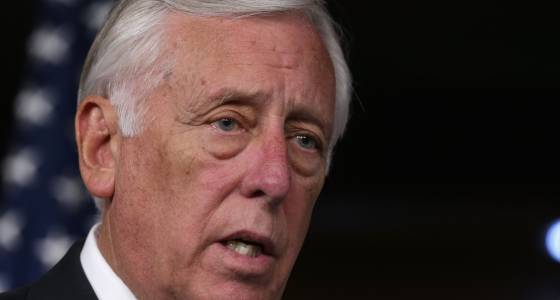 House Democratic Whip Steny Hoyer is calling on governors of both parties to embrace national redistricting reform when they gather for the National Governors Association winter meeting in Washington this weekend.

The Southern Maryland lawmaker sent letters this week to Wisconsin Gov. Scott Walker, the chair of the Republican Governors Association, and Connecticut Gov. Dan Malloy, who leads that group's Democratic counterpart, encouraging them to nudge their colleagues in Congress to back independent redistricting.

"I am asking that you...encourage your members, the rest of our nation's governors -- Democrats and Republicans alike -- to lobby the Congress to take action on bipartisan, redistricting reform," the letters read.

The letters were made public days after Democrats in Maryland's congressional delegation made a similar request of Gov. Larry Hogan, a Republican, who has called for an independent panel to draw political boundaries in his state.

Rep. Jamie Raskin of Montgomery County articulated the argument in a tweet Thursday that Hogan should "back bipartisan redistricting reform in America" rather than "giving Trump more votes in Congress."

Hogan spokesman Doug Mayer said the governor could be supportive of a nationwide effort, but that there just doesn't appear to be an appetite for it in Washington at the moment. Instead, Mayer said, the governor will focus on reforming how the process works in Maryland.

Spokespeople for Malloy and Walker did not immediately respond to a request for comment.

The debate between Democrats and Hogan over redistricting isn’t new, and the political subtext isn't hard to read. Of Maryland's eight House members, seven are Democrats. A unilateral change to how Maryland draws its districts could easily wind up giving Republicans a second and maybe third member in the state's delegation.

Democrats, foreseeing that possibility, have preferred to talk instead about the national redistricting plan, which they view as mutual disarmament: Democratic losses in Maryland could be offset by gains in other states. Anything less, they said, puts their party at a disadvantage while other states continue to draw maps that benefit the GOP.

But the possibility of Congress approving such legislation any time soon is nil. Democrats point to a measure crafted by Rep. Zoe Lofgren of California that would require states to use independent commissions to draw congressional boundaries rather than allowing governors and state legislatures to do that work.

The bill has 48 co-sponsors, all of them Democrats.

The real question in Maryland is how hard Hogan will push for redistricting reform and how Democrats in the General Assembly will respond. Hogan's proposal is likely to be popular with voters of both parties -- some of whom are upset at the state's gerrymandered districts crafted by then-Gov. Martin O'Malley and the General Assembly in 2011 -- and so state lawmakers can't easily dismiss it.

Even O'Malley has now disowned the maps he played a major role in making.

Both parties are cognizant that if Hogan wins reelection in 2018, it will give Republicans considerable sway over the maps drawn following the 2020 census. It would be the first time the GOP has had that opportunity in decades.