With no booze, tobacco or other vices, the Florida Strawberry Festival may be a quaint piece of Americana. But it's also the second-most attended fair in the state, outpacing the Florida State Fair and bigger metropolitan festivals. 23 Hours Ago22 Hours... 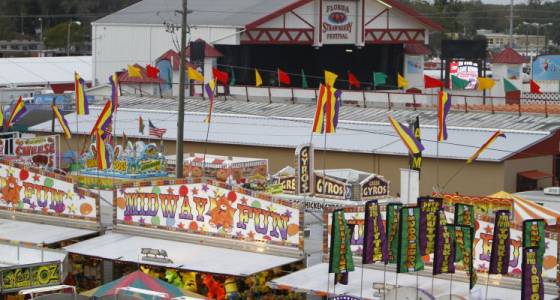 With no booze, tobacco or other vices, the Florida Strawberry Festival may be a quaint piece of Americana. But it's also the second-most attended fair in the state, outpacing the Florida State Fair and bigger metropolitan festivals.

A combination of hot music acts and theme-park style customer service training drew a record 560,387 visitors to the festival in 2016, with double-digit sales increases for the festival midway, according to carnivalwarehouse.com, an industry web site that ranks fairs nationwide.

The festival, which opens Thursday and runs through March 12, was founded in 1930. It keeps its old-fashioned charm with an 80-ride midway, farm animals, corny contests, agriculture exhibits and lots of food on a stick. And of course, strawberries in every form are abundant at the winter strawberry capital of the world.

The business end of all this Southern charm has helped the Strawberry Festival outpace the Florida State Fair's attendance, drawing 150,000 more visitors to Plant City than to Tampa last year.

A 2015 study by the Tampa Bay Regional Planning Council estimated the Strawberry Festival brought in $25.8 million in tourism spending in Plant City.

"The Strawberry Festival is the equivalent of having 100 jobs in the community paying $70,000 a year," said Randy DeShazo, an economic planner with the council.

It takes an army of nearly 2,500 volunteers to move so many people through the small town of Plant City in northeast Hillsborough County. And it takes a lot of hospitable messaging, said Paul Davis, the festival's general manager since 2008.

Enhanced greeter training, he said, from the ticket-takers to parking lot attendants has improved the overall experience.

"These are the people who start the fair experience for our guests," Davis said. "They are anticipating the Southern hospitality for which we are famous."

That hospitality includes its "roving ambassador" program. Like a mobile information booth, workers wearing bright red visors and red vests walk the grounds. Arms full of maps and brochures, they seek out the bewildered.

"You try to look for people who are looking at a map or trying to read signs, and we go up ask if they can use some help," said Lauren McNair, a former Strawberry Queen festival pageant winner who worked as a roving ambassador for a year. "Many people look a little bit shocked that you would approach them, because they don't expect customer service like that."

"We'll be using volunteers to ride with them on the tram and welcome visitors and update them on what's on the festival schedule for the day."

The festival's concert lineup is targeted to create synergy with the midway. This year features a host of big-time country, pop and rock acts that normally fill arenas. Among them: Little Big Town, Rascal Flatts, Needtobreathe, Willie Nelson, 3 Doors Down, Jennifer Nettles and the Blues Brothers, Dan Aykroyd and Jim Belushi.

Festival organizers sought input from organizers at Belle City Amusements, which provides the midway for the festival. They strive to book concerts that bring in younger fair-goers who will spend more money, especially on the weekend nights, on carnival rides before and after concerts.

"You bring in more young people, and they're the ones that are going to go to the midway," said Charles Panacek, president of Belle City Amusements, which reported an 18 percent increase in sales in 2016 compared with 2015.

According to national rankings, the Florida Strawberry Festival is perennially among the 50 largest in the U.S. in terms of attendance. Carnivalwarehouse.com ranked the Plant City berry blast 31st of the nation's fairs and festivals in its 2016 list.

At most fairs around the country, attendance is less than 100,000, said Ron Weber, editor of carnivalwarehouse.com.