How lawsuits are forcing cities to face their homeless issues

Curtis Gamble used to sleep sitting up on a bus bench.Before dozing off, the unemployed homeless former bus driver followed the same routine: Wary of being rousted from his spot, he’d pull the curved brim of his baseball cap low over his brow so nobody... 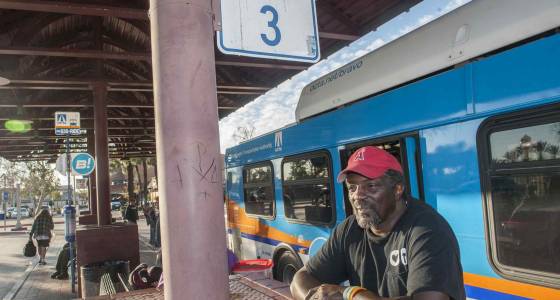 Curtis Gamble used to sleep sitting up on a bus bench.

Before dozing off, the unemployed homeless former bus driver followed the same routine: Wary of being rousted from his spot, he’d pull the curved brim of his baseball cap low over his brow so nobody at the Fullerton Transit Center could tell that his eyes were closed.

In December, Gamble’s fortunes took a turn when he settled a lawsuit against the city of Fullerton that Legal Aid Society of Orange County initially filed on behalf of another homeless man. Gamble, who joined the lawsuit in 2015 with friend James Mayfield, was awarded $20,000 – enough to rent a studio apartment into next year.

But more importantly, he says, the deal with the city included provisions aimed at helping other homeless people, including a $1 million commitment toward housing for people with extremely low incomes, installation of portable toilets at the transit center and zoning rules that could enable homeless shelters to be built in more locations around the city.

“It’s good to see the city officials cooperate with us now that we have lawyers,” said the 56-year-old Gamble, who had been homeless since becoming unemployed seven years ago. “Before, they would not take us seriously.”

To Gamble’s legal advocates and others, the outcome also illustrates how lawsuits brought on behalf of homeless people increasingly are being wielded in Southern California and elsewhere not just as punitive measures that win judgments for individuals, but to nudge municipalities to forge longer term solutions to deal with homelessness.

“It’s unfortunate it has to be used,” said attorney Crystal Sims, who was part of Gamble’s legal team. “But sometimes it’s the only way to get cities to do what they are required to do by law.”

Even when a lawsuit is limited just to the plaintiffs named in a suit, “cities that were reluctant to engage constructively are kind of forced to the table to start talking about solutions to homelessness,” said Tristia Bauman, a senior attorney with the National Law Center on Homelessness & Poverty, a Washington D.C.-based group whose mission is to end homelessness through the power of the law.

In particular, Bauman said there’s been a spike in recent years in challenges to ordinances that outlaw panhandling or that restrict sleeping or camping in public places. The most effective legal efforts, she added, are those that push for policy changes. Groups that include Legal Aid Society, the American Civil Liberties Union, and Public Counsel have stepped up efforts to bring their expertise to the aid of homeless populations.

The flip side is that much of the legal action is driven by the need to push back against what advocates say is the criminalization of homelessness as the numbers of people living in public spaces – including parks, civic centers, empty lots – rises. The chief argument in a recently settled Pomona lawsuit and others that target anti-camping laws: Homeless people are being penalized when they have no choice but to sleep outdoors or in their cars because no other option is available.

Efforts to dismantle encampments, often referred to as “sweeps” by the inhabitants and their advocates, also seem to be fueling a number of the lawsuits filed on behalf of homeless people, according to Bauman.

“There’s no national data, but based on reports from advocates on the ground and media reports, a lot of cities are now sweeping homeless encampments, which are growing in visibility, especially along the West Coast,” she said. “A lot of the recent suits are in reaction to sweeps.”

Look no further than Orange County.

Just this month, two federal lawsuits were filed in response to a public works project along the Santa Ana River. Moving forward with plans to stockpile tons of boulders and sand for flood control use would result in the dislocation of several hundred homeless people living in tents and other makeshift shelter near Angel Stadium in Anaheim.

Even though the county notified the homeless inhabitants that they would need to move, the Orange County office of the ACLU filed for a temporary restraining order on Feb. 10, saying that fencing off the area in preparation of storing the flood control materials amounted to imprisoning the people still there. The suit claimed that the county’s actions were resulting in “an unconstitutional seizure of both the people themselves and their property.”

Then on Feb. 13, the Elder Law and Disability Rights Center followed with its own filing in U.S. District Court in Santa Ana on behalf of five homeless people living in the same riverside location, also alleging violation of constitutional rights.

The county avoided a court date with the ACLU by reaching an agreement that extended more time to the homeless people to leave. Action in the other lawsuit is pending.

Public Counsel, founded in 1970 and self-defined as the nation’s largest pro bono law firm, secured an agreement from Pomona on behalf of 15 homeless people in a federal lawsuit. Following a temporary halt in the seizure and disposal of property belonging to homeless people, the settlement reached in September outlined measures the city must take, including ceasing enforcement of an overnight sleeping ban until an adequate number of shelter beds or other housing options are available; providing hundreds of storage lockers for homeless people to store their things; and issuing semi-annual progress reports to Public Counsel.

But the settlement allows the city to continue to clear out two sites beneath a railroad overpass known to be drug havens.

An earlier Los Angeles lawsuit, dating back to 2006, is often cited by homeless advocates as a touchstone in their legal battles against anti-camping laws and issuing of tickets to the homeless. That case, Jones v. City of Los Angeles, targeted city ordinances that restricted people from sitting, lying down and sleeping throughout the city.

The most aggressive enforcement took place in the downtown Skid Row area, said Bauman of the National Law Center on Homelessness & Poverty.

The 9th U.S. Circuit Court of Appeals ruled that the city’s practices violated the 8th Amendment prohibition against cruel and unusual punishment since homeless people had no alternative to sleeping at night in public. But because the settlement that followed included an agreement to vacate that court’s opinion on the promise the city would build additional housing units for the homeless, the Jones case did not set a binding legal precedent, Bauman said.

While the camping issue continues to be litigated on a case-by-case basis, the impact on policy reform has been different when it comes to legal challenges to panhandling laws. Those laws, Bauman said, “have been dropping like flies.”

A 2015 U.S. Supreme Court case, Reed v. Town of Gilbert, had nothing to do with homelessness but involved a municipal sign ordinance in Gilbert, Ariz. Still, the court’s decision expanded First Amendment rights in a way that ultimately has included the signs panhandlers use when asking for cash or other help.

“Panhandling speech is protected,” Bauman said. “If you can hold a sign saying ‘Get out and vote,’ but not ‘Homeless, need help,’ a city needs a compelling governmental reason to treat that speech differently.”

The National Law Center on Homelessness & Poverty is collecting information nationwide on lawsuits challenging policies and practices that negatively affect homeless people and plans to publish a manual in March with case summaries and tips on how to bring similar legal challenges. The center also launched a campaign called Housing not Handcuffs that intends to move communities away from failed criminalization policies toward housing solutions that work, Bauman said.

The organization is closely watching litigation involving the ACLU and the city of Laguna Beach, set for trial in April. The complaint, filed in August 2015, alleges that “aggressive” policing of disabled homeless people in the beach resort town is unconstitutional. The suit also contends that the city-run Alternative Sleeping Location homeless shelter on Laguna Canyon Road does not comply with the Americans with Disabilities Act.

The city declined the terms of a settlement offered by the ACLU in January, with City Manager John Pietig calling the demands “unreasonable.”

Because a good percentage of homeless people suffer from mental and physical disabilities, and are protected by the ADA, “a court order requiring a government to deal constructively with those populations would be very significant,” Bauman said.

For Gamble, the victory in Fullerton turned bittersweet. He lost his friend in late January when Mayfield, 38, died from apparent heart problems. Mayfield, a big man who wore a size 18 shoe, was always generous and jovial despite his circumstances, Gamble said. He occasionally found work as a security guard.

“He had a good life. He really enjoyed it.”

When Gamble and the man he calls “Big James” talked about their settlement, his friend was excited about his personal good fortune. “I had to remind him that, hey, it was a million-dollar settlement,” Gamble says, noting that other homeless people would benefit.

Gamble continues to advocate on behalf of the homeless, hoping to persuade city officials to convert the closed Hunt Branch Library into a shelter. The city-owned property is currently being rented by a church. Gamble still visits the transit center where he used to sleep and has observed the difference two portable toilets are making in the lives of other homeless people there.

“They were saying how happy they were that the restrooms were available to them.”