How far should Bethlehem go on ethics reform?

Members of city council agree that Bethlehem could benefit from campaign finance limits and gift bans, but seem divided on the need for an independent board of ethics.  Bethlehem Councilwoman Olga Negron-Dipini and Councilman Michael Colon announce... 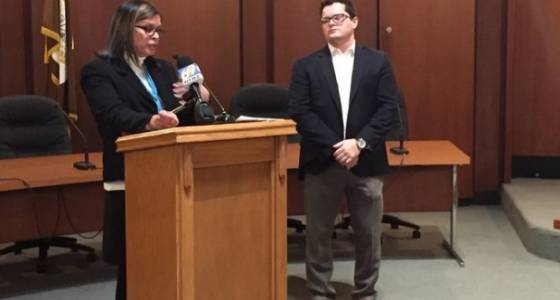 Members of city council agree that Bethlehem could benefit from campaign finance limits and gift bans, but seem divided on the need for an independent board of ethics.

The informational committee meeting drew a crowd of interested residents that thinned out at the night went on.

But those that were left at the meeting's end told council that campaign contribution limits, mandatory recusals and a Board of Ethics were all needed to renew citizen's faith in government.

"Let's start here and plant the roots on the local level and build our government from the bottom up," resident Steve Diamond said.

All council members said they want to be more transparent and accountable to those that elect them. But some worried about the ongoing costs of creating an ethics board and whether unfounded complaints could be used for political retribution.

"I can see that Board of Ethics being used as a political tool," Councilman Bryan Callahan said.

Council painstakingly went through the 30-page ordinance line by line questioning Negron and Colon on the meaning and intent of various aspects.

Ultimately, Council President J. William Reynolds said he thought that one expansive new law would take far too long to hammer out.

He indicated he planned to introduce a campaign finance ordinance in the near future that would be quite similar to what was discussed Monday night. He believes council should also look at its own gift ban and more contract transparency.

Councilman Shawn Martell may bring forward something on ethics education soon, Reynolds said. And it's up to other members of council to bring forward other

The draft proposal was culled from over a year of meetings with city residents and ethics experts, Negron said. She emphasize it was in a rough form, literally copied and pasted from best practices and other city's ethics ordinances, including Easton, Philadelphia and Reading.

But she brought it forward because she felt they'd reached the point where council needed to weigh in on the scope of such a proposal.

"It should be something we do together and that's why we're here," Negron said.

Reynolds indicated several times he felt that the ordinance was redundant because it included the State Ethics Code verbatim. He questioned the need for a city Ethics Board when citizens can already go file an ethics complaint with a local district magistrate.

"It takes the whole operation out of city hall," Reynolds said.

Resident Breena Holland said the current system puts the onus and financial burden on residents to weed out corruption.

The grand jury found her unfit for elected office and that she'd violated state ethics laws. Dolan resigned from council and Negron was elected to finish her unexpired term.

If Bethlehem had an ethics board, resident Dana Grubb said he believes it would have investigated Dolan long before it rose to Moragnelli's attention.

Negron said she was quite open to input from her colleagues. But she did stand firm on campaign contribution limits, although the exact figures are still up for debate, and requiring elected officials to disclose donations and recuse themselves.

The draft calls for abstaining from votes if an officials has received $250 or more from a donor in an election cycle, which several on council said might be too low of a threshold.

"If you received $4,000 from a developer you cannot vote," Negron said. "That can make a difference."

Resident Barbara Diamond, who helped craft the ethics proposal, told council that an independent Ethics Board would be a tool to help elected and city officials navigate thorny issues. Such a board could offer advisory opinions on many of the hypothetical situations council debated Monday night, she noted.

Most of council has spent their entire lives living in Bethlehem, a city of 75,000 where many people are linked, and it is hard to tell where the ordinance draws a line and what constitutes a violation, Reynolds said.

"It becomes a very, very slippery slope I think," he said.