How Europe could halt the Trump-ocalypse: Burman | Toronto Star

Step right up and see it before it’s over. America’s Shrinking Superpower: the greatest show on earth.Watch it as the 20th century’s towering global leader magically transforms itself into a self-serving, shrinking pipsqueak.All brought... 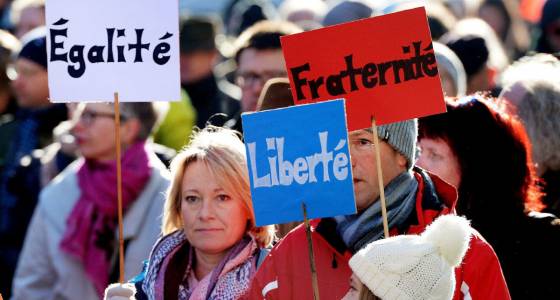 Step right up and see it before it’s over. America’s Shrinking Superpower: the greatest show on earth.

Watch it as the 20th century’s towering global leader magically transforms itself into a self-serving, shrinking pipsqueak.

All brought to you by the scary folks at Trumpworld.

For Europeans, Donald Trump’s chaotic circus finally came to town. Last weekend, senior members of the Trump administration spoke at the annual Munich security conference where, for the past five decades, Europe’s political and military establishment have met to review the world’s most threatening security challenges.

The visit happened in an atmosphere of high anxiety. If the aftershocks from the Trump political earthquake are now evident worldwide, nowhere are the tremors more intensely felt than throughout Europe.

After decades of dealing with Russian schemes to sabotage the Europe-America alliance, Europeans now fear the unpredictable new U.S. government is following the Russian lead.

In Munich, Mike Pence, Trump’s vice-president, tried to reassure the Europeans. The U.S. supports NATO and the European Union, he promised, and it opposes Russia’s efforts to threaten Europe.

But Pence’s audience knew that these assurances were bogus. His boss was already on the record as ridiculing the EU and calling for its breakup, for applauding the Brexit vote in Britain and insulting German Chancellor Angela Merkel, and for expressing his apparent puppy love — again and again and again — for Russia’s despised Vladimir Putin.

European leaders have every reason to be worried. After all, Trump’s hostility and Putin’s aggression are a toxic mix. But it may actually be the voting booths of Europe — far from the heartland of America — that will provide Trump with his first big electoral rebuke.

In the United States, we now know how the majority of voters are responding to the chaos of Trump’s first weeks in office. His approval rating among Americans at this stage of his presidency is the lowest by far compared with previous U.S. presidents. But unless he is impeached or dies, Trump will remain with us like a throbbing headache.

However, we will soon know how Europeans are responding. Crucial national elections will be held in the Netherlands, France and Germany over the next few months that should give us a good sense of where Europe is heading.

These votes will determine whether a dangerous drift to far-right authoritarian rule is indeed underway, or whether Europeans — repulsed at the often racist and raw emotions unleashed by Trump — are seeking more moderate options.

In Europe, there is widely held suspicion about where Trump stands on this question. In his inaugural address, Trump defended his “America First” approach by asserting the “right of all nations to put their own interests first.” But he has defined American self-interest in the most selfish of ways.

In doing so, Trump is turning his back on 70 years of a bipartisan U.S. foreign policy that has had the U.S. at the centre of a closely knit international order — with America’s economic and military security actually being richly enhanced.

Initially, Trump’s victory gave a boost to Europe’s extreme right political parties. His aggressive, anti-immigrant message seemed to resonate among many Europeans who resented the recent influx of refugees, and there was some talk of these parties achieving power.

But Trump’s erratic first weeks as U.S. president have apparently appalled many Europeans. In the Netherlands, with an election March 15, Geert Wilders, the far right leader, has been leading the polls, but the race appears to be tightening. A similar movement against the extremist National Front leader Marine Le Pen seems to taking shape in France.

In other years, these elections might not loom as important, but these are no ordinary times.

Trump’s victory in November had a lot to do with dissatisfaction. There is more unhappiness with today’s “system” — as it relates to the economy, immigration and trade — than previously acknowledged. And this has also been driving the election campaigns in Europe.

As this is happening, academic researchers are beginning to detect something perhaps even more important. There has been an erosion of democratic values in both the United States and Europe. Increasing numbers, particularly of young people, seem to feel critical about their political leaders and cynical about the value of democracy as a political system. Authoritarian alternatives no longer seem outlandish.

As Europeans prepare to vote, and Americans continue to brood, this is a reminder that, in this 21st century, we can no longer take anything for granted.

Tony Burman is former head of Al Jazeera English and CBC News. Reach him @TonyBurman or at tony.burman@gmail.com .

Tony Burman is former head of Al Jazeera English and CBC News. Reach him @TonyBurman or at tony.burman@gmail.com .