How A-listers shamelessly campaign for Oscars

Earlier this week, a notoriously press-shy Casey Affleck appeared in his third PETA ad in 10 months, exposing the horrors of circuses as somber music played in the background.“I choose to work in the entertainment industry,” said the Oscar nominee —... 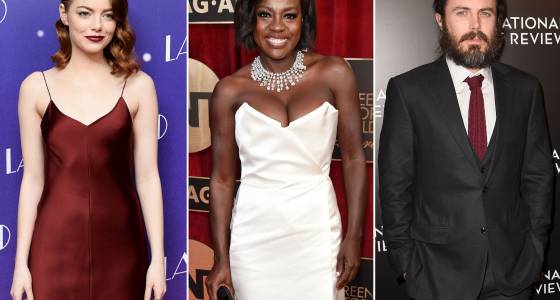 Earlier this week, a notoriously press-shy Casey Affleck appeared in his third PETA ad in 10 months, exposing the horrors of circuses as somber music played in the background.

“I choose to work in the entertainment industry,” said the Oscar nominee — for Best Actor for “Manchester by the Sea” — of the commercial, filmed in December. “But animals in circuses and other traveling shows are never given a choice.”

Choosing to act is one thing. Choosing to participate in the circus also known as the Academy Awards is another.

Whether Affleck’s ode to big cats was a last-ditch effort to curry favor among Oscar voters or a particularly well-timed humanitarian effort, no one knows (except his publicist, of course). But one thing’s for sure: With the 89th Academy Awards upon us Sunday, the entertainment industry can finally breathe a collective sigh of relief that another exhausting, expensive campaign season has come to an end.

Producers, directors and nominees such as Viola Davis and Emma Stone have been hitting the publicity circuit with a vengeance to woo the Academy’s some 6,687 voters — a charm-offensive tour of post-screening Q&As, magazine covers and endless talk shows. The studios, meanwhile, have ponied up millions of dollars for TV spots and full-page vanity ads for their moneymakers.

“It’s like any political campaign,” said Hollywood Reporter Editorial Director Matt Belloni. “If you’re meeting [nominees] in person, you’re probably going to be more inclined to give their performance or film the benefit of the doubt.”

“It’s getting [the voters] to see your film,” Harvey Weinstein told The Post of Task No. 1 in the campaign playbook. His Weinstein Co. film “Lion” is up for six Oscars, including Best Picture. “It’s getting someone to take two hours.”

Viola really wants it. She’s going to the opening of a car door.

Although there have been some nominees who refuse to play the game — like Tom Hardy and Joaquin Phoenix — typically even the surliest of stars steps up to the plate when it comes time to shill. An Oscar win, after all, can be a career game-changer.

“We’ve never seen this much of Casey Affleck before,” said an Oscar campaign strategist who worked with one of this year’s nominees. “It’s smart for him to campaign, because he’s 41 and he’s been a character actor for a while. [A win] would cement his ability to take lead roles in non-indie movies, so to speak.”

“He’s terrible [at campaigning], but he also has nothing to lose,” he added. “It’s somebody else’s if he doesn’t.”

A Hollywood manager, who asked to be anonymous, said Affleck’s parade of Oscar-timed interviews is laughable.

“I’ve seen a reporter ask a very detailed, thoughtful and smart question, and his answer was a one- or two-word answer,” said the manager, who adds that Affleck’s agent at WME has complained that his once-underdog client is becoming a diva.

“Casey’s [saying] that ‘CAA is after me, this agency is after me,’ and asking, ‘Where are my leading man roles?’”

The strategist, for one, doesn’t fault Davis for doing whatever it takes to win. The actress previously lost two Oscars, in 2009 and 2012. This year, she hedged her bets, putting herself in the running for Supporting Actress for what many think is actually a lead role. (The thinking being: No one is beating Emma Stone for “La La Land.”)

“She’s not 30 years old; she’s not an ingénue. [A win] would skyrocket her asking price. The Academy Award is the only award that has a direct correlation to an increase in fees,” the strategist said.

As Davis told late-night host Jimmy Kimmel last week — days before the Oscar ballots closed — being the odds on favorite to win, and then losing, is devastating.

For Washington — who directed and stars in “Fences” — the strategist, who has previously worked with the actor/director, said, “It’s pure ego play. He craves awards despite the fact that he acts like he doesn’t.”

And even though it seems like Stone has been a shoo-in for months, insiders told The Post that she has been the most aggressive of them all.

“Emma has been everywhere,” said the strategist. “It’s too much, but it doesn’t matter, because who doesn’t like Emma Stone? It’s like seeing your favorite cousin or niece.”

At the Producers Guild Awards in January, producer Marc Platt attempted to politicize the film in his acceptance speech.

“He was trying to draw a parallel between that film and building borders and knocking them down, and it was just, ‘Really? Can’t it just be a f - - king musical that we enjoyed?’ ” said the strategist. “There was a lot of eye-rolling going on that night.”

Weinstein caught similar flak for his campaign for “Lion.”

An ad that ran in the Los Angeles Times earlier this month featured the film’s child star and read: “It took an extraordinary effort to get 8-year-old actor Sunny Pawar a visa so that he could come to America for the very first time. Next year, that might not be an option.” At the bottom of the ad, in bigger font, it said: “Remember where you came from.”

“I’m always amazed by the stunts that Harvey Weinstein pulls off,” said Belloni. “This year he . . . essentially [urged] voters to vote for ‘Lion’ if they opposed Trump’s travel ban.

Emma has been everywhere. It’s too much, but it doesn’t matter, because who doesn’t like Emma Stone?

“I don’t want to say that he crossed the line, but it seems a bit crazy to vote for a movie because you oppose the president’s political policy. But Weinstein has proven himself over and over again to be smarter than anyone else in this area.”

Weinstein tells The Post that Trump analogies are preposterous: “That’s nonsense. The movie is certainly political, and we emphasize that, but there is no Trump in any of this. It stood on its own principle.”

The Academy has recently cracked down on what constitutes acceptable campaigning. Ads that tarnish competitors are banned, and this year, extravagant events — used in the past to woo voters with star power and rich food — have come under fire. Academy members are prohibited from attending “any non-screening event, party or dinner that in any manner is reasonably perceived to provide undue influence targeted at members in the form of excessive hospitality,” the organization regulates.

Of course, that’s not going to stop some from shelling out for Oscar love.

“A reasonable campaign is a few million bucks,” said the strategist, “but Travis Knight, who’s heir to the Nike fortune, has spent like a drunken sailor.”

He said Knight, who directed “Kubo and the Two Strings” has a slim chance of winning Best Animated Feature but continues to dig into his own pockets — and not those of Focus Features, the studio distributing the flick — to promote it.

“He’s running television ads for a movie that came out six months ago, that failed and didn’t make any money.”

Knight’s not the only one who’s gone rogue.

In 2011, actress Melissa Leo paid for trade ads for her Best Supporting Actress nomination for “The Fighter,” featuring bizarre photos of herself in a plunge-neck dress, bending toward the camera. She won, but manager Black said the industry was “taken aback by the ads.”

“I guess she wanted to show everyone she was a fabulous star and didn’t look in real life the way she looked in the movie,” said Black. “Maybe she felt that she wasn’t getting enough recognition from the studio. But it looks desperate and sad for stars to spend their own money.”

While some A-listers are starved for attention, others want nothing to do with the hobnobbing and peacocking.

Leonardo DiCaprio was long known to shun the spotlight — and lost four Oscars. Finally, when he was nominated in 2016 for Best Actor for “The Revenant,” publicist Peggy Siegal gave it to him straight.

“‘It’s your year, you’re winning. You’ve got to do the campaigning,’” Siegal told Vanity Fair. “He did it with grace and class.” And he won.

Mo’Nique was less susceptible to sweet talk. In 2010, she was outspoken about her refusal to campaign while nominated for Best Supporting Actress for “Precious.” She won, but there were repercussions.

The actress told Hollywood Reporter in 2015 that director Lee Daniels said, “Mo’Nique, you’ve been blackballed … because you didn’t play the game.”

Weinstein said the upside of playing along is that voters “want to know that you want it, that it means something to you and that it’s important to you.”
Just know that voters are playing a game, as well.

Veteran Oscar consultant Tony Angellotti recalled a story actor Michael Caine told him about campaigning for an Oscar in Los Angeles, decades ago.

“He went to a party and was met by a guy who took his hand and said, ‘I loved your performance. I’m voting for you.’ [Caine] said, ‘Thank you so much, you’re so kind,’” Angellotti said. “[Caine] walked across the room, went to the bar, turned around and the same guy was greeting Michael’s competitor with the same phrase.

“As Michael said, ‘That’s when I learned not to trust anyone in Hollywood.’”