Donald Trump pledged in his campaign that, upon taking office, he would unleash U.S. immigration agents to chase down the "bad hombres" among the millions of undocumented immigrants in the country. Well, they have been unleashed, but Immigration... 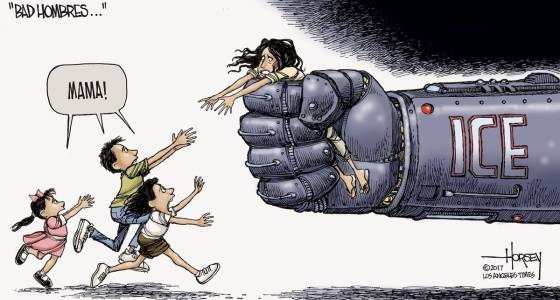 Donald Trump pledged in his campaign that, upon taking office, he would unleash U.S. immigration agents to chase down the "bad hombres" among the millions of undocumented immigrants in the country. Well, they have been unleashed, but Immigration and Customs Enforcement(ICE) officers are sweeping up mothers and young people with no major crimes or terrorist activities on their records.

Guadalupe Garcia de Rayos, a mother of two American-born children who had been in the United States herself since she was 14, was sent back to Mexico last week. She hadn't robbed a bank or sold drugs or blown up any buildings. In fact, for the last eight years she had been checking in regularly with immigration officials. Nevertheless, she was taken away from her husband and children and her Phoenix home and deported.

Garcia de Rayos is no hardened criminal, she just had the bad luck of living in a country with a heart that has hardened.

Jeanette Vizguerra is not a nasty crook, either. She is just another Mexican mother who has been checking in faithfully with immigration authorities. Vizguerra and her husband have been living in the U.S. since 1997. Of their four children, three are American citizens. Their eldest daughter is part of the Deferred Action for Child Arrivals (DACA) program, a group of young undocumented immigrants often called "Dreamers" who have lived most of their lives in the United States.

Vizguerra got word that, like Garcia de Rayos, she was about to be deported. Forced to leave her family, she has taken sanctuary at Denver's First Unitarian Church.

A couple of days ago in a suburb of Seattle, 23-year-old Daniel Ramirez Medina was taken into custody by ICE, even though he is covered by DACA. Immigration agents allege that Ramirez confessed to being a gang member. His friends insist the confession was coerced. Reportedly, Ramirez has no criminal record of any kind.

U.S. Rep. Linda Sanchez, a Los Angeles County Democrat, said in an interview with Free Speech Radio News that it is obvious ICE is not going after just bad guys. "Instead of focusing on the removal of hardcore criminals, a quarter of the people detained in the ICE raids are innocent people, including the arrest of a Dreamer in Seattle," Sanchez said. "We've heard that some parents aren't sending their kids to school because they're afraid to. People are not answering the door, they're not leaving their homes to go to work, because of the fear that these raids have incited."

Among the items Mr. Trump addressed in his free-wheeling news conference on Thursday was DACA. He talked about the "incredible kids" who have been protected as Dreamers, but said "DACA is a very, very difficult subject for me."

The difficulty he faces is that, on one side, he has Latino Republicans -- many of them evangelical Christians -- who have pleaded with him to give the Dreamers a path to legal status. On the other side he has immigration hardliners -- including two of his closest advisors, Stephen Bannon and Stephen Miller -- who want mass deportations with no mercy for young people who have never really known another country as home.

The LA Times has reported that an executive order that would end DACA has been drawn up by Mr. Trump's staff, but, because of Mr. Trump's ambivalence, senior Trump aides are now looking at two indirect ways to kill the program, either by encouraging states to bring court challenges or by getting Attorney General Jeff Sessions, a long-time foe of any immigration compromise, to make a determination that DACA is not legal.

The ICE dragnet that is catching many people who are not "bad hombres" and the reports of draconian schemes being hatched in the White House have sent a shiver of fear through many homes. At a gathering at the Times building Thursday night, a group student journalists and artists from Los Angeles-area high schools shared those worries, as well as their hopes, in stories and poems. One Latino boy summed up his feelings this way:

"We are humans with the same unalienable rights, no matter where we come from. Whether or not we have documentation, it is the inside that counts; the values that we share and the ideals we believe in. And that's what makes us American. That's what makes us human."

Those are words worth pondering seriously before our government starts driving away many thousands of fine people who, far from being criminals, exemplify the American Dream.

Two-time Pulitzer Prize winner David Horsey is a political commentator for the Los Angeles Times. Go to latimes.com/news/politics/topoftheticket/ to see more of his work.