Historically black colleges, including 2 in Ohio, receive support - but no money - from White House

CLEVELAND, Ohio - President Donald Trump has signed an executive order providing support, but no money, to the nation's historically black colleges, including two in Ohio. The executive order creates an advisory board and requires some federal agencies... 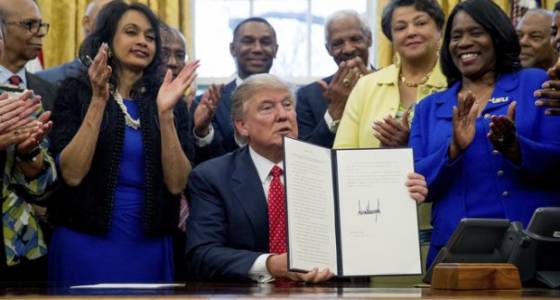 CLEVELAND, Ohio - President Donald Trump has signed an executive order providing support, but no money, to the nation's historically black colleges, including two in Ohio.

The executive order creates an advisory board and requires some federal agencies to prepare an annual plan describing efforts to help the colleges participate in federal programs and initiatives.

But the order provides no additional federal funding to the colleges, including private Wilberforce University and public Central State University in Ohio. Those colleges and other historically black colleges face financial issues.

There are more than 100 historically black colleges and universities, designated by the U.S. Department of Education to schools established before 1964 intending to serve the black community. Today they serve students of all races.

University leaders, including Central State President Cynthia Jackson-Hammond, met with Trump on Monday and stood by him Tuesday as he signed the order in the Oval Office.

Leaders had sought an order with an "aspirational" funding goal that "would nearly double federal support to HBCUs," according to a memo from the United Negro College Fund.

Jackson-Hammond said Trump and Vice President Mike Pence acknowledged that the black colleges had historically been underfunded and pledged to help, according to a Central State press release.

"HBCU leaders were able to position our mission, vision and intentions regarding the sustainability of our universities," Jackson-Hammond said. "We were heard and we all hope that intentional actions will occur."

Executive order is not new

Executive orders pledging support to the schools have been signed by presidents since the 1970s. Trump's order is not unlike one signed by Barack Obama in 2010, except that he moved the initiative from the Department of Education to the Executive Office of the President.

"They have played such an important role in achieving progress for African-Americans and in our nation's march for justice," Trump said as he signed the order.

"With this executive order, we will make HBCUs a priority in the White House -- an absolute priority...And we will pledge our support to you, your mission, and to our shared mission of bringing education and opportunity to all of our people."

The order differs from what the schools hoped for, terms of support, Ebony.com reported. In December, historically black college presidents laid out a 10-point plan outlining what they felt would assist the institutions. Those points included: convening a White House summit on the schools; including them in a national infrastructure program; a plan to rejuvenate and boost the effectiveness of Pell Grants; and improving and simplifying the student aid process, among other items.

Many leaders also chastised Education Secretary Betsy DeVos, who released a statement after meeting with several presidents calling the schools "real pioneers when it comes to school choice" on Monday.

She was accused of ignoring the fact that many of the schools were founded because black students were not allowed to attend segregated white schools, not because education pioneers wanted to give African-Americans more options in higher education, the New York Times reported.

DeVos later backtracked and tweeted support of HBCUs on Tuesday.

Providing an alternative option to students denied the right to attend a quality school is the legacy of #HBCUs.

Omarosa Manigault, director of communications for the Office of Public Liaison in the White House, helped Trump draft the executive order.

She is a Youngstown native and received her bachelor's degree from Central State. She received a master's and doctorate from Howard University.

Manigault became well-known in 2004 during her appearance on the first season of Trump's series, The Apprentice. Although she had supported Democrats in the past Manigault joined the Trump campaign in July 2016 as director of African-American outreach.

Central State and Wilberforce are located within walking distance of each other in  Wilberforce, about 20 miles east of Dayton.

Central State receives a special state supplement of about $11 million a year to offer scholarships and keep tuition low.

The university was placed on fiscal watch in April 2015 by the Ohio Department of Higher Education because of financial problems. It has been regaining its financial footing.

The university was given "land grant" status in 2014 in a farm bill passed by Congress. In 2016 Central State received a $2 million grant to support agriculture and engineering programs.

The university received $4.4 million from Ohio for agriculture research and extension initiatives in the current two-year budget.

Wilberforce University is seeking to sell two major buildings in an effort to raise money.

Officials are seeking $7 million from a buyer who would then lease the buildings to the college.

The university was recently in danger of losing accreditation, which is needed to offer federal grants and loans. In 2015  the university maintained its accreditation by improving its financial status, increasing enrollment and addressing administrative issues.