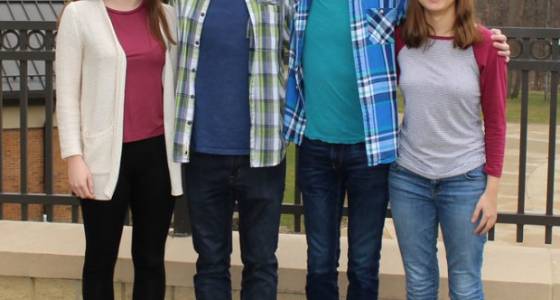 MEDINA, Ohio - Four Highland High School seniors have been named finalists in this year's National Merit Scholarship program. This is the highest number in Highland history.

Kelly Meaden, Alaina Monroe, Braden Webb and Christopher Wright are among 15,000 students nationwide who have advanced to this level of the scholarship competition.

Beginning in March and continuing through mid-June, about 7,500 finalists will be notified that they have been selected to receive a Merit Scholarship.

Kelly, the daughter of Mark and Nancy Meaden of Hinckley Township, is considering attending The Ohio State University or Northeast University in Boston. She plans to major in engineering and/or data science.

Alaina plans to attend the University of Cincinnati and major in business. She is the daughter of Jason Monroe and Gabrielle Gillota of Montville Township.

Braden, the son of Jeremy and Stacy Webb of Montville Township, plans to study math in college. He is undecided on his choice of school, but is considering Brigham Young University.

Christopher plans to attend The Ohio State University to study civil engineering. He is the son of Paul and Barbara Wright of Montville Township.

Granger Elementary School students had the chance to "purchase" a cup of lemonade Feb. 17 by donating a canned food item to benefit the pantry at the Church at Stony Hill.

The lemonade stand was the culminating activity for the school's "One District, One Book" program, in which all Highland elementary school students read the same book for one month.

This year's book was "The Lemonade War" by Jacqueline Davies.

The Highland High School Academic Challenge Team will compete in the regional tournament May 6 after winning the county competition on Feb. 10.

They competed against teams from Medina, Brunswick, Wadsworth, Buckeye, Cloverleaf, Black River and Revere high schools at the all-day tournament sponsored by the Educational Service Center of Medina County.

Nominations for this year's Highland Pride Award are due March 31.

Each school year, the Highland Local Schools Board of Education recognizes individuals whose work for the schools exemplifies an extraordinary spirit of pride.

There are two potential awards - one for a community member and one for a district employee.

Winners will be honored at the May 15 school board meeting at Highland High School. A reception will follow for family and friends.

Letters of nomination must include the name, address and phone number of the nominee (who must be at least 18 years old); reason for the nomination, including specific examples, dates, and years of service; and the nominee's level of involvement with the schools and community.

Letters should be sent to Dawn Marzano, director of communications, Highland Local Schools, 3880 Ridge Road, Medina OH 44256. They can also be emailed to marzano@highlandschools.org.

Save the date: Shred & Threads Day is April 8

It's time to start cleaning out your file cabinets and closets.

The Hinckley Elementary School PTO will hold its sixth annual Shred & Threads Day from 9 a.m. to noon April 8 in the school's parking lot.

Gateway Records Management will be on hand to provide secure document shredding, and Easter Seals of Northern Ohio will be collecting cloth and textile donations.

A minimum $5 donation is requested for shredding. Please consider a larger donation if you have more than 10 boxes.

If you have more than 10 boxes of documents to shred, let the PTO know at fundraising@hinckleypto.com by March 18.

Proceeds of the day's event will benefit the PTO.