LOS ANGELES — Some 24,000 Southland customers — households and businesses — began the day without power today after strong winds caused poles and power lines to topple.The outages included more than 21,000 customers of the Los Angeles... 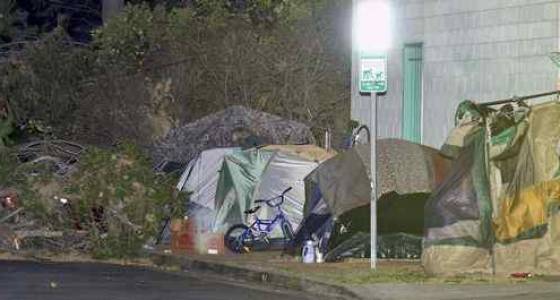 The outages included more than 21,000 customers of the Los Angeles Department of Water and power. Angelenos without power included more than 3,000 in the Exposition Park area and about 2,200 in the Vermont Square neighborhood, according to the DWP. An outage was also affecting more than 1,800 customers in El Sereno and slightly over 1,000 in Rancho Park, it said.

Lesser outages were reported elsewhere in the city. DWP asked customers to be patient as crews worked “around the clock” to restore power taken out by those major winds.

Winds with gusts of up to 60 mph were blamed for felling several trees and branches, which, in turn, took down down power lines. In Downtown Los Angeles, gusts took down a traffic light pole, snapping it at its base, at the southwest corner of Main and First streets.

The National Weather Service said the high winds wracking Southern California this week are the result of weak frontal systems passing north of the region.

Gusty north winds may persist in some areas of the Southland through tonight, possibly giving way to moderate northeast winds Saturday, according to an NWS statement

A high wind warning, which reflects damaging winds or gusts of at least 58 miles per hour, will be in force until 9 a.m. in the San Gabriel Mountains in Los Angeles and Ventura counties.

Expected at least until the warning expires were northwest-to-north winds of between 25 and 40 miles per hour with 65-mph gusts, the statement said, adding the strongest winds would blow through the Interstate 5 Corridor and over the highest peaks.

A wind advisory indicating winds or gusts of at least 35 mph is scheduled until 9 a.m. today in the San Fernando Valley and the Santa Monica Mountains Recreational Area, with 20-30-mph winds accompanied by gusts of 40-50 mph expected in both areas. The winds will be strongest near the L.A.-Ventura county line and Ventura County’s Lake Casitas area, the statement said.

The winds will kick up tonight in San Bernardino County, where a high wind warning will be in effect from 10 p.m. Friday until 2 p.m. Saturday.

A wind advisory also will be in effect until 9 a.m. in the Antelope Valley, where winds of 20-35 mph are being reported, along with gusts of 35 mph.

The strongest winds will lash the northwest sections of the Antelope Valley, the statement said, adding that motorists should be wary of blowing sand and dust, which could reduce visibility to a quarter-mile or less.

Temperatures, meanwhile, were expected to be mostly in the 70s and 80s today, reaching 89 degrees Fahrenheit in Woodland Hills.

The NWS forecast sunny skies today and highs of 55 in Big Bear; 74 on Mount Wilson and in Avalon; 75 in Lancaster; 76 in Palmdale and Torrance; 77 at LAX; 80 in San Pedro, Santa Clarita and Rancho Cucamonga; 81 in Redlands; 82 in Long Beach, downtown L.A., Ontario and San Bernardino; 83 in San Gabriel, North Hollywood and Burbank; 84 in Van Nuys and Pasadena; 85 in Whittier and Northridge; 86 in West Covina; and 88 in Woodland Hills.

Temperatures will climb by up to 7 degrees Saturday, then begin a slow descent.