CaptionClosePolice on Wednesday arrested a man after a high-speed chase that ended with a crash on the city's West Side.It is unclear what initiated the chase, but it came to a conclusion around 8:30 a.m. at the intersection of Culebra Road and Zarzamora... 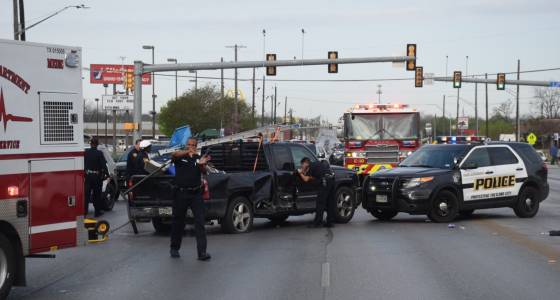 Police on Wednesday arrested a man after a high-speed chase that ended with a crash on the city's West Side.

It is unclear what initiated the chase, but it came to a conclusion around 8:30 a.m. at the intersection of Culebra Road and Zarzamora Street, where the driver collided with another car and was then surrounded by police, witnesses said.

"There was no messing around," said Aaron Fontanez, 31. "They just yanked him out. There was no 'put your hands up.'"

Church bells from the Basilica of the National Shrine of the Little Flower were ringing for Ash Wednesday as officers arrested the suspect and treated him for his wounds in the middle of the eastbound lanes of Zarzamora, which were closed down as officers investigated the scene.

This is a developing story. Check back with mySA.com for updates.