Here are 5 things you might not know about sanctuary cities

The news changes often regarding the Trump administration’s approach to immigration, but most signs point toward tougher enforcement against those without legal status.Some communities are pushing back, saying they want to protect undocumented residents... 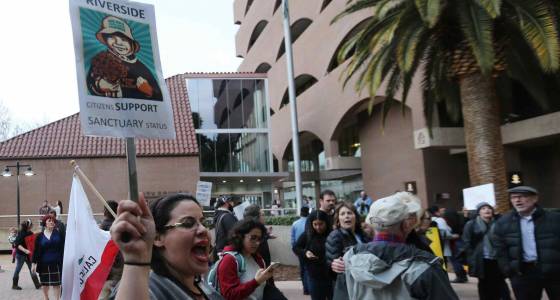 The news changes often regarding the Trump administration’s approach to immigration, but most signs point toward tougher enforcement against those without legal status.

Some communities are pushing back, saying they want to protect undocumented residents who they say are otherwise law-abiding people with jobs and families. But opponents say such policies protect lawbreakers, including some violent criminals who harm the community.

With federal officials threatening to withhold funding from so-called sanctuary jurisdictions, how can local officials tell who could be affected? The answer is, it’s complicated.

Here’s a look at some of the commonly asked questions on the topic.

Q: What is a sanctuary city?

A: There’s no single answer.

“It’s in a sense up to almost any city that wants to put itself in that category to define what it means,” said UC Irvine political science professor Louis DeSipio, who explained that for some it’s a symbolic show of support for unauthorized immigrants and their families. Others, he said, use the term to signify a policy that local police ignore requests from Immigration and Customs Enforcement to hold someone in jail longer than state or local law requires.

With concerns about a federal crackdown on sanctuary cities, some local officials are trying to reassure their constituents without using that word. For example, school districts in Riverside, San Jacinto, San Bernardino and other Southern California cities have declared themselves “safe havens” that won’t share information on students’ immigration status or use district resources to help immigration authorities enforce federal law.

Meanwhile, city councils in Monterey Park, El Monte and elsewhere have passed resolutions saying they’ll protect all residents’ rights regardless of their status and not use city resources to help enforce immigration law – but they leave out “sanctuary.”

Q: Why do some people want cities to declare themselves sanctuaries, especially if it may put them on the wrong side of federal rules?

A: Some residents and elected officials want local officials to fight what they see as a policy shift toward federal authorities deporting people with little or no criminal background, beyond being in the country illegally.

Immigration and Customs Enforcement spokeswoman Lori Haley wrote in an email that the agency’s priority is foreign nationals “who pose a threat to public safety and domestic security,” including people with criminal histories, but that no one in the U.S. illegally is exempt from potential arrest and deportation.

But police are also wary of being seen as immigration officers because “a segment of the population is going to be very reticent to report crimes, and that opens the door to victimization,” Bueermann said.

Q: How and why might local police cooperate with immigration officials?

A: It’s more of an immediate issue for county sheriffs, who typically run local jails, because they hold suspects and are sometimes asked to notify ICE if they’re set to release someone who is wanted for immigration violations.

But there’s disagreement between federal and local officials over when someone can be held for ICE to pick up. Darrel Stephens of the Major Cities Chiefs Association, which represents police chiefs of the largest 50 U.S. cities, said federal officials have argued that a detainer – an ICE-generated document – is sufficient to keep someone in custody. But some courts have disagreed and said a warrant from a judge is required.

Around the U.S., 37 law enforcement agencies in 16 states have special agreements with ICE under which they’re trained to question people in jail about their immigration status, according to ICE’s website. The only such agreement in California is with the Orange County Sheriff’s Department.

Q: Some people suggest anyone in the country illegally should be fair game for law enforcement to round up. Could local police really do that?

A: Without a special agreement with ICE, law enforcement officials say, they can’t arrest someone simply for being undocumented.

Crossing the border without documents or overstaying a visa is typically a civil misdemeanor, and a cop in California can’t arrest someone for that if they didn’t witness it, Riverside Police Chief Sergio Diaz said.

When illegal immigrants get charged with serious crimes, federal officials would usually have access to that information. What’s unclear is whether federal officials will put pressure on local law enforcement to check the status of or inform ICE about anyone they arrest, Bueermann said.

DeSipio said President Trump has been “uniquely unpredictable” on a number of issues, including immigration. It’s hard to predict what will happen, “which is leading to huge amounts of fear in unauthorized immigrant communities, because the other shoe is going to drop someday and they don’t know where it’s going to.”

A: In Orange County, Santa Ana declared itself a sanctuary city earlier this year. Most other cities in the region have stayed away from the issue.

A few, such as Los Angeles and Pasadena, have said they won’t collect data on residents’ status or volunteer to help immigration officials, but they will follow applicable laws and court orders. However, they avoid using the term “sanctuary.”

Activists recently pressed Riverside to pass a sanctuary resolution, but city leaders opted not to put it on their agenda.