Matt Zinser saw a hidden gem in the century-old north Minneapolis house despite its asbestos, a collapsing living room floor and rooms waist-high in clutter.It’s one of nine tax-forfeited houses being renovated in a Hennepin County pilot program that... 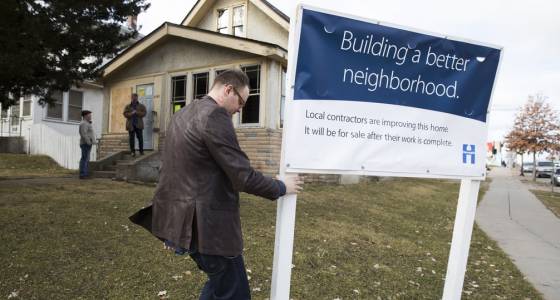 Matt Zinser saw a hidden gem in the century-old north Minneapolis house despite its asbestos, a collapsing living room floor and rooms waist-high in clutter.

It’s one of nine tax-forfeited houses being renovated in a Hennepin County pilot program that not only redevelops old, rundown homes but also assigns the work to small local contractors from areas hit hardest by tax forfeiture.

“A lot of these homes are in tough shape,” said Zinser, whose Minneapolis company, Load-Bearing Inc., was hired by the county to oversee construction. “We’re doing it right. … it’s a win-win for all.”

The program, estimated to cost $1.2 million, aims to give small businesses the rare chance to work with the state’s largest county, gain experience on larger projects and put women- and minority-owned companies to work.

“The work doesn’t have to go to the five largest businesses,” said Commissioner Linda Higgins, who urged Hennepin County to act after hearing from frustrated contractors unable to get work in her north Minneapolis neighborhood. “Let’s help everyone rise.”

The county is expanding the initiative this spring to government buildings, shifting projects like painting or installing new carpet to small local contractors. That has led other public agencies to contact the county to replicate the program, county leaders said. LEILA NAVIDI - Star Tribune James Sorenson with Hennepin County fixed the sign in front of a home being renovated on Dupont Avenue N. in Minneapolis.

“It’s just a place that they can learn and grow,” County Auditor Mark Chapin said.

Inmates from the county’s Sentencing to Service Homes program built a roof and garage, while crews from Action Construction Services, a minority-owned Minneapolis business, took charge of the house renovation.

“It’s good to see people of color doing work like this,” said Roger Combs, Action’s operations manager, who added that neighbors often stop by to inquire about buying the house or getting hired. “They like seeing us around. They feel proud.”

They’re getting help from five local subcontractors, including a woman-owned plumbing company. “It keeps the money circulating in the community,” Combs said.

Hennepin County had a similar program in the 1990s that remodeled 45 tax-forfeited houses with the help of a single general contractor. That program ended during the housing collapse.

The new program spreads the work out to many small, emerging contractors who live in the community but can’t compete with larger companies or have trouble with hurdles like high insurance requirements or cash flow to pay for work while waiting for reimbursement from the county.

“A lot of players control the industry,” Combs said. “We want to do a lot more of it. I really applaud the county.”

Last year, county leaders met with contractors and adjusted requirements to address issues such as paying contractors right away. The county picked 14 contractors, giving some their first experience with managing subcontractors or handling more complex projects. Women and people of color are doing 80 percent of the work.

“Without these projects these contractors wouldn’t be able to access these large projects,” said Gilbert Odonkor, a former contractor now working in the county’s purchasing and contract services department. “Going forward they’ll be able to leverage that.”

While larger companies may not be pleased by the shift, county leaders say there’s enough work to go around in the rebounding economy.

‘Why not the little guys?’

Hennepin County manages 88 houses (which are owned by the state) out of 373 tax-forfeited properties. Those houses are usually sold to cities like Minneapolis, which has its own renovation program, or at auction. Sometimes the houses are left boarded up for years, and sometimes they’re renovated hastily without following building codes.

Hennepin’s program, however, ensures the rehabbed houses are move-in ready with energy-efficient, code-compliant repairs. The program returns houses to the tax rolls and adds community pride, Higgins said. For instance, one rehabbed house had been occupied by gang members; another harbored a suspected drug operation in the basement.

The houses will be sold for their appraised market value and the sale will pay for renovations, with any proceeds going back to the county. County officials then will evaluate the program and see if it has raised real estate values and diversified the workforce.

“This is a really tangible way to find a better way to do things and will benefit everyone in the county,” Higgins said. “Everybody wants a shot at doing the work — why not the little guys?”