Group in Schenectady aims to be "last defense" before abortions

CaptionCloseSchenectadyAbout 35 people with various anti-abortion groups protested outside of a Planned Parenthood in Schenectady Saturday as part of a 40-day campaign to dissuade pregnant women from having abortions. The event was held in conjunction... 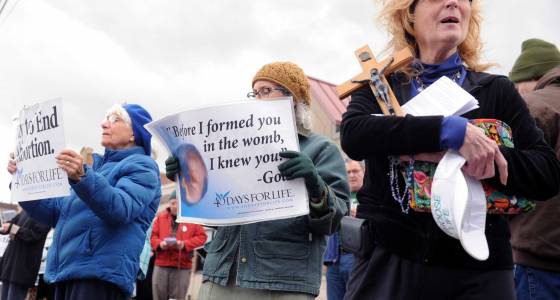 About 35 people with various anti-abortion groups protested outside of a Planned Parenthood in Schenectady Saturday as part of a 40-day campaign to dissuade pregnant women from having abortions.

The event was held in conjunction with others around the country as part of the 40 Days For Life movement. Event organizers, who spent much of the event Saturday in prayer and singing religious songs, maintain that unlike certain groups calling for Planned Parenthood to lose federal funding, they have no political ambitions.

"Primarily, we're here to pray for and support those faced with a wrenching decision," said Bishop Edward B. Scharfenberger, head of the Roman Catholic Diocese of Albany. "So many times, people face this decision alone." He said the 40-day event is held this time each year to coordinate with Lent, observed by some Christian churches, that begins on Ash Wednesday and ends six weeks later on Easter Sunday.

"We're here to bring truth and hope for women and men" who use Planned Parenthood, said event organizer Viviane Strain. She called the group the "last defense" to try and direct women to nearby crisis pregnancy centers and helplines before they use Planned Parenthood's abortion services. "They have another choice, and the choice is life," she said.

Beth Lynch has taken part in similar gatherings since 1970, when abortion was made legal in New York.  As president of the Schenectady County Right to Life group, Lynch said she thinks the rallies, even if sometimes small, have had an effect on many. She cited Abby Johnson, a Texas-based anti-abortion activist who took up the cause after working at a Planned Parenthood. The cause "has been well publicized ... and has brought people out of abortion."

Generally, Americans are still split on abortion as both a legal and moral issue, though support is at a two-decade high this year, according to Pew Research Center. About 60 percent of American adults say abortion should be legal in all or most cases, compared with 37 percent  who say the opposite, Pew found. However, 44 percent of Americans say abortions are morally wrong, according to Pew.