Some volunteers at the Glenn L. Martin Aviation Museum in Middle River like to work in the archive stacks, where the shelves brim with photographs, magazines and manuals from the pioneering era of airplane manufacturing and design.Others prefer to be outside,... 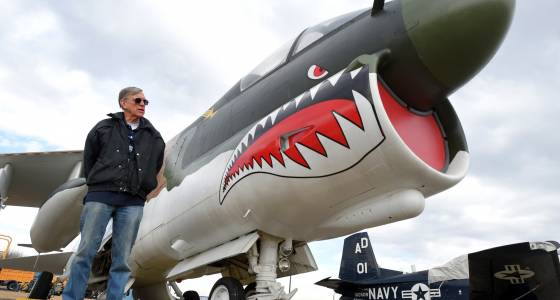 Some volunteers at the Glenn L. Martin Aviation Museum in Middle River like to work in the archive stacks, where the shelves brim with photographs, magazines and manuals from the pioneering era of airplane manufacturing and design.

Others prefer to be outside, restoring the museum's "flight line" of vintage aircraft — including historical planes built for U.S. warfare.

"Some of us are aircraft people and some of us are history people," said Nancy Zellinger, a volunteer who considers herself the history type.

The small museum, located at the Martin State Airport, showcases the story of aviation icon Glenn L. Martin, whose aircraft manufacturing company played an integral role supplying the military during World War II, employed thousands and changed the landscape of this part of eastern Baltimore County.

Now the volunteers who operate the museum are piloting it toward an additional mission —piquing youth interest in the fields of aviation and aerospace through programs aimed at STEM subjects — science, technology, engineering and math.

"Sometimes seeing an airplane is something that can convince a kid that they might want get into engineering or science," said Ted Cooper, an Ellicott City resident who took the reins as the museum's executive director in January. "That's what we've discovered."

The museum, which opened to the public in 1993, hosts tours and educational programs such as a hands-on model rocket project for elementary students and a middle and high school program where participants assume the roles of aviation workers to "restore" a B-26 Marauder.

Another initiative called First Flight — run with the help of the airport — gives middle and high school students a chance to fly in a single-engine plane.

Senior Master Sgt. Erick Stone, JROTC instructor at Kenwood, said working with the museum has opened his eyes to the activism and enthusiasm of its volunteers.

"They've got a lot of aviation enthusiasts," said Stone. "A lot of those folks are role models."

Stone noted many people in eastern Baltimore County have relatives who once worked for the Glenn L. Martin Co. For students, the partnership has helped them learn about local history and their own roots.

At its peak during World War II, Glenn L. Martin employed some 53,000 people, and founded communities such as Aero Acres and Stansbury Estates to house its workers.

The museum is dedicated to Maryland's aviation and space history, but with a special focus on the Martin Co., a predecessor to today's Lockheed Martin, one of the world's largets defense contractors.

Martin — an Iowa native who taught himself to fly — founded his company in California in 1912, when he was 26 years old. He moved to Baltimore in 1928 and bought more than 1,200 acres in Middle River, transforming the area into an employment hub.

The museum notes that from its founding to 1960, Glenn L. Martin Co. produced more than 11,000 aircraft, including Navy seaplanes and B-26 bombers used in World War II. Beginning in the 1950s, the company ventured into missiles, space and electronics, and stopped producing aircraft in 1960.

The museum is on land that was once part of the aircraft company, and has 15 aircraft on display, mostly military planes from the Korean and Vietnam war eras. They include a McDonnell Douglas F-4C Phantom II and two Martin B-57 bombers.

Museum administrator Jane Michael, a retired Baltimore County teacher, said the nonprofit has long offered educational programs, but leaders want to focus more on reaching students in middle and high school — a time when youngsters start thinking about what they would like to do as adults.

Joshua Heagy, a 17-year-old senior at Chesapeake High School, learned about internship opportunities at the museum through his school, and jumped at the chance. For the past several months he has been helping catalog thousands of museum documents and photos, and has learned lots of "random facts about aircraft" along the away.

"Everyone knows so much, it's a amazing," he said. "The archives are massive."

Heagy said he's had an interest in aviation since middle school — it's something he said he feels "in my heart" — and after graduating from Chesapeake, he plans to study aerospace engineering at West Virginia University.

Jonathan Dean, a spokesman for the Maryland Aviation Administration, said the industry needs partners such as the museum to introduce a new generation to careers in aviation.

The museum, which is run entirely by volunteers, has an annual budget of about $50,000. Funding comes from memberships and a variety of individual and corporate donors, as well as the Baltimore County Commission on Arts and Sciences.

Cooper, a retired Department of Defense computer scientist, said the museum is exploring renovations to make it more interactive, including video elements and more hands-on displays.

He and other museum leaders want to raise its profile — many people don't know it exists, he said, let alone that it offers education programs.

"We used to have people come in and say, 'I've been living here for 15 years and I didn't even know you were here,'" Coopersaid .

The organization has expanded its social media presence, and several years ago launched Open Cockpit Days – where visitors can climb into featured planes. The event initially attracted a few dozen people, but interest has grown steadily, and last year one session drew about 500 visitors. The next is scheduled for April 8.

And in October, more than 3,000 people visited the museum over two days. On that occasion, the facility had a neighbor that helped draw the crowds: The Blue Angels were in town, using Martin State Airport as "home base" for its Maryland Fleet Week & Air Show performance in Baltimore.

The museum also is open for drop-in visits Wednesdays through Saturdays, 11 a.m. to 3 p.m. Admission is $3, $1 for ages 6 to 12 and free for 5 and younger. Information about special events, education programs and a speakers series is available at mdairmuseum.org.