Inside the Depot in downtown Minneapolis Tuesday evening, several dozen young women — some with dyed pink hair — showed off robots they had built, sometimes using everyday objects.Their audience was engineering professionals at the Robotics Alley... 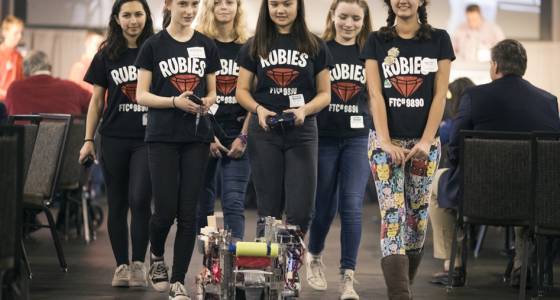 Their audience was engineering professionals at the Robotics Alley Conference and Expo.

Izzie Mack, a member of girl group the Rubies, used game controllers to drive the group’s 18-cubic-inch robot down the aisle of the convention space.

The Rubies and the Ponytail Posse, from St. Paul, were the only lady-centric groups that participated in Tuesday’s “March of the Robots” event at the conference.

It’s important to “break the stereotype” that women are not interested in the engineering field, said Mack, a 10th-grader at Southwest High School.

“Girls don’t get into science or they think it’s too nerdy,” said Nancy Koshy, a member of Ponytail Posse.

The Robotics Alley Conference and Expo, an annual event held in the Twin Cities, was created to spur public and private partnerships in the worlds of robotics and automation.

Sen. Amy Klobuchar, who greeted conference attendees via video, said that robotics technology will transform the workforce and economy.

The statement resonated as industry professionals spoke about cybersecurity, 3-D printing of the human body, the future of agriculture and self-driving vehicles.

“This is so empowering ... this is the future,” said Mitra Kian, a ninth-grade student at Southwest High School and member of the Rubies.

Kian and the other girls were adamant about making a career in the STEM fields. They also are excited about the future: What might their careers could look like in 10 or 20 years?

When the Ponytail Posse demonstrated its robot Stacy, one of her creators proudly showed how they had used part of a standard dresser drawer to help their mechanical teammate make up-and-down movements.

“Drawer slides as a lift mechanism,” she said. “Who would have thought to do that?”