PHOENIX — Jake Lamb hit a three-run homer and the Arizona Diamondbacks beat San Francisco 9-3 Thursday night to win a four-game series against the Giants at Chase Field for the first time in nine years.The Diamondbacks needed seven tries to win a home series... 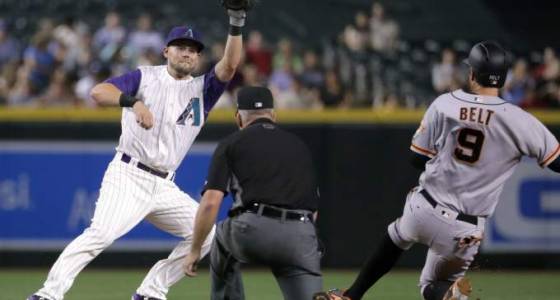 PHOENIX — Jake Lamb hit a three-run homer and the Arizona Diamondbacks beat San Francisco 9-3 Thursday night to win a four-game series against the Giants at Chase Field for the first time in nine years.

The Diamondbacks needed seven tries to win a home series in 2016 but are 3-1 for the first time since 2013 under first-year manager Torey Lovullo.And they did it against the Giants, who won nine of 10 in the desert last season.

Jorge De La Rosa (1-0) got one out and walked two after replacing Robbie Ray in the sixth inning.

Samardzija struck out five over the first two innings but gave up consecutive opposite-field homers in the fourth: Peralta to left, Goldschmidt to right. Goldschmidt’s was career hit No. 848, passing Steve Finley for second on Arizona’s career list. He has a ways to go for No. 1 — Luis Gonzalez had 1,337.

Lamb put Arizona up 5-3 with his three-run homer in the sixth inning.

Ray retired the first seven batters until Hill hit a belt-high pitch over the plate well over the wall in left for his first homer. Brandon Crawford had a run-scoring single off Ray in the fourth inning, and Buster Posey chased him with a run-scoring double that put the Giants up 3-2 in the sixth.

Giants: CF Denard Span missed his third consecutive game due to left hip tightness, but he stretched before Thursday’s game and is hoping to play Friday in San Diego.

Giants: RHP Matt Cain makes his 2017 debut to start a three-game series in San Diego. The three-time All-Star went 4-8 with a 5.64 ERA and was limited to 21 appearances due to injuries.

Diamondbacks: RHP Shelby Miller makes his first start of the season when Arizona kicks off a three-game series against the Cleveland Indians. Miller went 3-12 with a 6.15 ERA in his first season with the Diamondbacks in 2016.