GE thrilled employee stuck in Qatar is back safe

CaptionCloseGeneral Electric Co. says it is elated that Sirin Hamsho, an engineer  who works at  its renewable energy division in Schenectady, is back at work after a tense several weeks in which she did not know if she would make it back from Qatar... 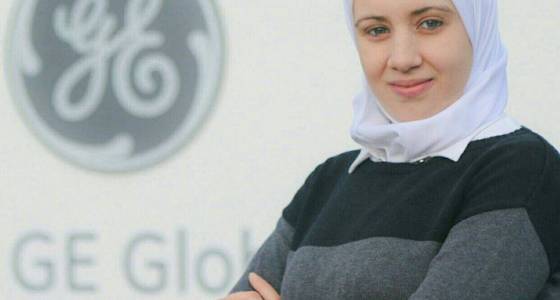 General Electric Co. says it is elated that Sirin Hamsho, an engineer  who works at  its renewable energy division in Schenectady, is back at work after a tense several weeks in which she did not know if she would make it back from Qatar due to President Donald Trump's so-called travel ban.

Hamsho posted on Facebook over the weekend that she was home in Niskayuna with her husband and children after traveling to Qatar back in January for a business and personal trip.

Hamsho, who is a native of Syria but also has French citizenship, is well regarded at GE, and her husband, Omar Al Assad, is an MIT-educated engineer who also work at GE at its Global Research Center in Niskayuna.

The company, along with U.S. Rep. Paul Tonk0, reached out to help Hamsho in Qatar when Trump's executive order temporarily banning citizens from seven predominately Muslim countries from entering the United States was signed on Jan. 27. Syria was one of the seven countries whose citizens were banned under the order.

Although a federal appeals court ultimately stayed the executive order, Hamsho was initially told she could not reenter the United States even though she has a valid visa.

However, federal officials later clarified that someone like Hamsho with dual citizenship could reenter the U.S. as long as they present a passport from a country not under the ban, like France.

Because the travel ban was stayed by the appeals court, those conditions became moot, and valid visa holders have been allowed back in the United States regardless of nationality.

However, Trump has indicated that he will sign a new, more legally iron-clad executive order soon, and the Wall Street Journal is indicating that it will exempt current visa holders like Hamsho from the ban.

Such a change would benefit GE, which has many brilliant employees like Hamsho from around the world who work in the United States and often travel for work back and forth from the U.S.

Hamsho has said little about her trip to Qatar, but she spent some of the time there appearing on programming for Al Jazeera, the media conglomerate based in Qatar.

Hamsho is a film maker and is often sought out to speak about being a woman working in the tech field, as well as for her experiences as a Muslim woman living and working in the west. Hamsho has also sought to help war refugees from her native Syria find homes in the Capital Region.