Galleries Videos CONTACT ADVERTISE
Famagusta 24°
clear sky
BUSINESS EDUCATION ENTERTAINMENT HEALTH POLITICS SCIENCE SPORTS TECHNOLOGY
12:08 Guide To Online Sports Betting: How To Choose A Sportsbook
08:28 What Are Some Reasons to Consult a Brain Injury Lawyer?
09:24 Blockchain Solutions for Enterprises: How To Increase Efficiency And Profitability
07:06 How To Deal With A Car Crash In New York
17:43 Tips to keep in mind while choosing the casino site
11:34 Relation Between Employee Theft and Pre-employment Screening Check
04:37 Search your own desired site to play sports for betting
18:00 Top 3 Career Path Options for Business Analysts Preview
15:35 The history of Imen Jane, who is the influencer and the charges on the...
18:48 Sebastian Vettel's Greatest Races
BIST
1124
GOLD
459.690
USD
7.6460
GPB
9.8009
EUR
8.8844
Breaking News
Top 3 Career Path Options for Business Analysts Preview
Close

From tiny pots to large plots, there's joy to be found in every space

There are windowsills all over the world filled with small edible plants, usually a few pots of fresh herbs. A city cook with a longer, wider sill might even sow a few flats of microgreens as well.But let's say there's a sunny patch of yard, as little as... 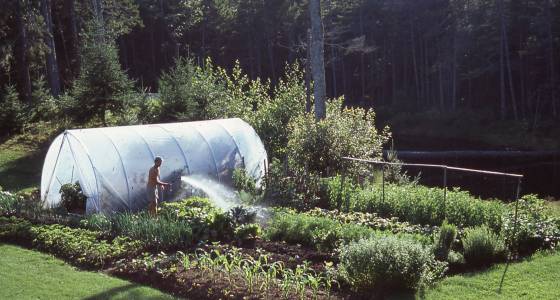 There are windowsills all over the world filled with small edible plants, usually a few pots of fresh herbs. A city cook with a longer, wider sill might even sow a few flats of microgreens as well.

But let's say there's a sunny patch of yard, as little as 10 feet by 10 feet, where several soil-filled planters could surround a sitting area. Fill them with a few tomato plants, annual herbs such as basil, rows of cut-and-come-again lettuce, and you'll have a summer of modest salads.

Take away the chairs and plant the whole thing with food, and there's room for a more productive salad operation. Peppers are good compact plants for summer, along with staked or trellised cherry tomatoes, cucumbers and pole beans. Sow spinach and arugula for cool fall days. Make a border of parsley, scallions and alpine strawberries.

If you want a wider range and have the space, expand the garden to, say, 20 by 20 feet. I've had gardens that size and found room for a zucchini plant or two, despite their tendency to sprawl. I followed early crops with later ones such as broccoli, carrots, onions and beets.

Even a small garden adds pleasure to your life, but for many families that's not enough. They'd like to grow most of the produce they eat, a goal that requires space and time.

A perfect example would be the garden my friend Costas Christ planted in his yard on the coast of Maine. It measures 30 by 60 feet and sustains all the vegetables mentioned above and more, including leeks, eggplants, kale, trellised peas for early summer and even a stand of sweet corn. There's a small plastic hoop house in the garden, built by a handy young neighbor, that allows tomatoes to ripen early and protects hardy greens in wintertime.

Anne Arundel County again dominated the luxury homes market last year, but homes from Harford, Howard and Baltimore counties moved up in the ranks. Take a peek at the priciest pads sold in the Baltimore region in 2016.

Such a large garden becomes part of your life. You might spend one day a week weeding, watering, training crops on supports and planting new crops. But you can reduce weeding time by using mulches or by frequently cultivating with a hoe.

That work can also be a pleasurable activity. Christ, a writer for National Geographic Traveler and a founder of the ecotourism movement, spends a lot of time on the road and takes great joy in the garden when he's at home, as do his wife, Sally, and their two grown sons, Nikos and Costas Jr. All of them are great cooks, and a meal at their house involves a splendid array of veggies - in salads, roasted and served on platters, stuffed, skewered in kebabs, or grilled with fish. Perennial herbs such as sage and oregano plants provide seasoning.

Elaine Blackman stopped shopping at Nordstrom because the store carried Ivanka Trump's fashion line and then started shopping there again once the store discontinued the line. Michelle Kissling, though, began shopping the fashion line because of the boycott. (Amy Davis & Kenneth K. Lam, Baltimore Sun video)

The store has still struggled to compete with big retailers, wireless carriers and e-commerce sites. (March 9, 2017)

The store has still struggled to compete with big retailers, wireless carriers and e-commerce sites. (March 9, 2017)

A garden the size of the Christs' was once a part of every American homestead. But you might be surprised to find that today's family food gardens, though fewer and smaller, outpace the old ones in yield. That's because traditional planting schemes followed the farm model, in which the space between rows allowed for horse-drawn equipment to till, sow and hoe. Modern gardeners tend to grow more intensively, in beds rather than rows, with less space between plants. They pay more attention to succession planting, in which one crop is followed by another in the same spot, as the seasons change.

Crops that will eventually grow large, such as Brussels sprouts, can be interplanted with small early ones such as radishes or head lettuce. Cut-and-come-again greens bear a lot longer than those where the whole head is cut. Trellised crops give you a big harvest on a small footprint. Season-extension techniques such as using cold frames, quick hoops and small greenhouses also increase yields. Taken all together, these tricks can, in effect, double a garden's size without covering any more ground.

Very large gardens are out of the question for most people, but it's important to know what is possible. You could grow a year's supply of root crops such as potatoes, carrots and kohlrabi for long-term harvest and/or storage. Winter squash, sweet potatoes and beans for drying all keep well without a cellar. You might even experiment with grains that are easy to thresh, such as wheat, millet, corn for polenta and hulless oats. That's a great project to do with kids.

Ambitious gardens are especially popular in hard times. But a garden of any size, at any time, can give you a sense of self-reliance, hope, pleasure and delicious food for the table.

Damrosch is the author of "The Four Season Farm Gardener's Cookbook"; her website is www.fourseasonfarm.com.