HOUSTON — Former President George H.W. Bush has been hospitalized in Houston for four days with a recurrence of a case of pneumonia he had earlier in the year, a family spokesman said Tuesday.The 92-year-old former president and father of former president... 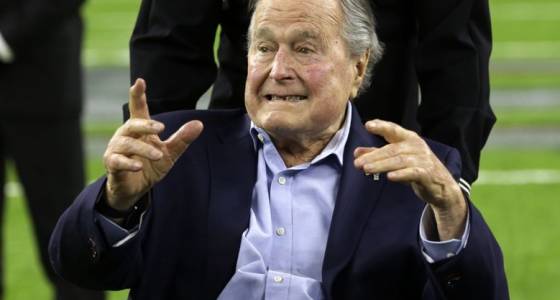 HOUSTON — Former President George H.W. Bush has been hospitalized in Houston for four days with a recurrence of a case of pneumonia he had earlier in the year, a family spokesman said Tuesday.

The 92-year-old former president and father of former president George W. Bush has been in Methodist Hospital in Houston since Friday for observation because of a persistent cough, Bush spokesman Jim McGrath said in a brief statement. He said doctors diagnosed a mild case of pneumonia that has been treated and resolved.

The former president "is in very good spirits and is being held for further observation while he regains his strength," McGrath said.

Bush, who served as president from 1989 to 1993, had spent 16 days in the hospital for treatment of pneumonia in January.

He was hospitalized in 2015 in Maine after falling at his summer home and breaking a bone in his neck. He was also hospitalized in Houston the previous December for about a week for shortness of breath. He spent Christmas 2012 in intensive care for a bronchitis-related cough and other issues.

Bush has a form of Parkinson's disease and uses a motorized scooter or a wheelchair for mobility. Despite his loss of mobility, Bush celebrated his 90th birthday by making a tandem parachute jump in Kennebunkport, Maine. Last summer, Bush led a group of 40 wounded warriors on a fishing trip at the helm of his speedboat, three days after his 92nd birthday celebration.