Pirates left-hander Steven Brault, a former Orioles farmhand who was traded to Pittsburgh before the 2015 season, pitched a scoreless first inning Saturday against the organization that drafted him.“It was cool that I got to face the Orioles,” Brault... 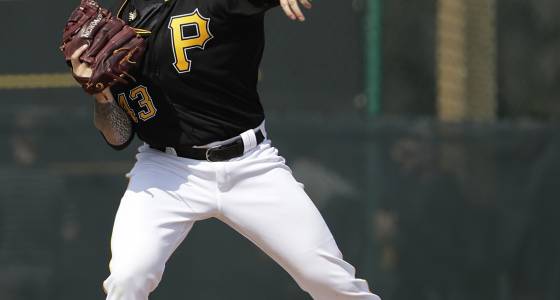 Brault was traded to the Pirates along with minor league left-hander Stephen Tarpley for outfielder Travis Snider, who was supposed to be the heir apparent to Nick Markakis. But Snider hit just .237 in 69 games with the Orioles before being released that August.

Brault allowed the first batter he faced to reach base – Orioles leadoff hitter Joey Rickard reached on an error by Pirates third baseman David Freese – but then struck out right fielder Craig Gentry looking and induced an inning-ending double-play from Manny Machado.

Brault’s fastball was clocked at 94 mph multiple times on the stadium radar gun at LECOM Park.

The 24-year-old Brault is competing for a back-end rotation spot with the Pirates this spring. He made his big league debut last season, going 0-3 with a 4.86 ERA in eight games (seven starts). He spent most of the season at Triple-A Indianapolis, going 2-7 with a 3.91 ERA in 16 games (15 starts).

The only player in the Orioles lineup Saturday who Brault played with was first baseman Trey Mancini. But Brault didn’t face him.

Tarpley was one of two minor league pitchers the Pirates sent to the New York Yankees last season in a trade that netted them right-handed starter Ivan Nova. Tarpley was 6-4 with a 4.32 ERA in 20 starts at High-A Bradenton before the trade.