Dr. Gideon Koren, the founder and former director of the Hospital for Sick Children’s embattled Motherisk program, is under investigation by the province’s medical regulator.The College of Physicians and Surgeons of Ontario (CPSO) has confirmed... 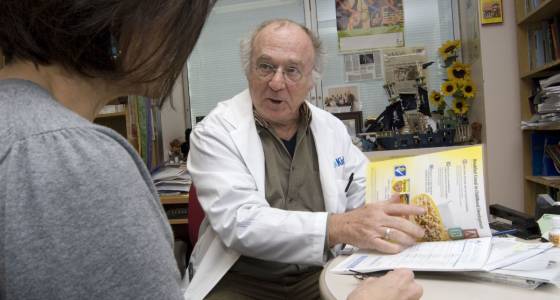 Dr. Gideon Koren, the founder and former director of the Hospital for Sick Children’s embattled Motherisk program, is under investigation by the province’s medical regulator.

The College of Physicians and Surgeons of Ontario (CPSO) has confirmed it is investigating Koren — a rare move by the college, which is mandated to keep confidential its investigations unless there is a “compelling public interest” to disclose the information.

College spokesperson Kathryn Clarke said she could not provide details about the nature of the probe or when it was launched.

A SickKids spokesperson said the hospital sent the CPSO a summary of findings from its internal investigation into Motherisk in 2015. The SickKids probe was launched after a Star investigation exposed questions about the reliability of Motherisk’s hair drug and alcohol tests. The probe uncovered serious problems at the lab and its affiliated call centre, prompting a public apology by hospital CEO Michael Apkon, who had initially defended the reliability of Motherisk’s tests.

Koren retired from SickKids in June 2015 after the hospital shuttered the Motherisk lab and reassigned oversight of the Motherisk program. He could not be reached for comment and his lawyer did not respond to calls from the Star for this story.

He is listed as a member of the big data team at Maccabitech, the business development arm of the Maccabi Group, an Israeli health-care company. His profile on the Maccabitech website describes him as a “clinical pharmacologist/ toxicologist with long experience on the effects and adverse effects of medications and chemicals in human. (sic)”

“At the University of Toronto he established and oversaw a large research program on the safety and risks of drugs in pregnancy and children,” the profile states.

There is no mention of SickKids or Motherisk, which he founded at the hospital in 1985 and grew into a leading resource for pregnant and lactating women and their doctors about the effects of medications, alcohol and drugs of abuse. Maccabitech did not immediately respond to a request for comment.

Koren has held a medical licence in Ontario since 1982 and is also licensed to practise in Israel, where he was educated, according to his CPSO profile. A source confirmed that he is living and working in the Tel Aviv area.

Spokespersons for the departments of medicine and pharmacy at University of Toronto, where Koren has previously taught, said on Tuesday that he no longer holds appointments with those faculties.

He retired from Western University in 2014 and retains professor emeritus status, said a spokesperson for the medical school.

“His work at Western was entirely related to research. The forensic studies in question were not conducted at Western,” she said.

The CPSO reprimanded and fined Koren $2,500 in 2003 for writing anonymous “poison pen letters” to Dr. Nancy Olivieri and other colleagues at SickKids during a tense battle with Olivieri — behaviour the disciplinary panel described as “childish, vindictive and dishonest.” Koren denied writing the letters until they were tied to him through DNA testing.

In December 2015, a provincially established independent review concluded that Motherisk’s hair tests were “unreliable” and “inadequate” for use in the thousands of child protection proceedings across Canada and handful of criminal cases in which they were submitted as evidence between 2005 and 2015.

Child welfare agencies relied heavily on Motherisk’s hair tests as proof of parental substance abuse. Although child protection cases were the “bread and butter” of the lab’s work, no one in the lab, including Koren, had forensic training, and operations “fell woefully short of internationally recognized forensic standards,” wrote Justice Susan Lang, who conducted the review.

Lang identified significant concerns with the reliability of the hair tests for the entire 2005-2015 period she was assigned to review. But the tests Motherisk conducted before 2010 were particularly problematic. During this period, the lab did not have the capability to confirm results with so-called gold-standard testing, and relied on a preliminary screening test, despite the fact that “the requirement to carry out a confirmation test on any preliminary positive results . . . was highlighted in both the literature and in all internationally recognized hair-testing standards well before 2005,” Lang concluded.

There was also a written caution included in the screening test that Motherisk used stating that it “provides only a preliminary analytical test result. A more specific alternate chemical method must be used in order to obtain a confirmed analytical result.”

Yet Motherisk “very rarely” sent samples to its reference laboratory for such confirmation and failed to inform children’s aid societies and other customers that the results were only preliminary, Lang found.

From 2005 to 2010, Koren signed each of the result reports before they were released, but neither he nor anyone else at Motherisk checked the work of the technician who performed virtually all of the tests, Lang concluded. (Although her review was limited to the 2005-2015 period, Lang reported that Motherisk started performing hair tests for use in child protection proceedings in the 1990s.)

Koren has never spoken publicly about the Motherisk controversy.

The SickKids’ investigation revealed that Motherisk had misled the hospital for several years about its proficiency testing process. It also exposed a privacy breach at the Motherisk call centre resulted in staff using records in at least 70 cases to contact people for their consent to use their data without the approval of the hospital’s Research Ethics Board.

Following questions from the Star in 2015 about Koren’s ties to the Quebec-based drug company Duchesnay, the maker of Diclectin, a popular morning sickness drug that Motherisk endorsed, the hospital implemented new conflict-of-interest policies and added a disclosure on the Motherisk website.

An ongoing probe of thousands of individual child protection cases in Ontario that relied on Motherisk testing has so far identified 24 cases in which the hair tests played a key role in the decision to remove children from their families.

Koren and SickKids are named as co-defendants in several lawsuits seeking damages on behalf of parents who claim they lost custody of their children due to Motherisk’s flawed hair tests.

In his online profile at Maccabitech in Israel, Koren is described as “the author of more than 1,600 scientific papers.” The Lang review identified six articles he co-authored that incorrectly stated that results obtained using the screening test had been confirmed with a gold-standard method “when that was not so.”

Koren declined an interview request from Lang’s lawyers, but in written submissions he provided through his lawyers, he said that letters had been “sent to the editors of these journals advising them of the errors in the descriptions of the methods used.” Editors of three of the affected journals have confirmed they received letters. The editor of a fourth journal did not respond to a request from the Star.

With files from Jacques Gallant

With files from Jacques Gallant

Keywords:
College Of Physicians And Surgeons Of OntarioSickKidsMotheriskHospital For Sick Children
Comments