Galleries Videos CONTACT ADVERTISE
Famagusta 30°
few clouds
BUSINESS EDUCATION ENTERTAINMENT HEALTH POLITICS SCIENCE SPORTS TECHNOLOGY
12:08 Guide To Online Sports Betting: How To Choose A Sportsbook
08:28 What Are Some Reasons to Consult a Brain Injury Lawyer?
09:24 Blockchain Solutions for Enterprises: How To Increase Efficiency And Profitability
07:06 How To Deal With A Car Crash In New York
17:43 Tips to keep in mind while choosing the casino site
11:34 Relation Between Employee Theft and Pre-employment Screening Check
04:37 Search your own desired site to play sports for betting
18:00 Top 3 Career Path Options for Business Analysts Preview
15:35 The history of Imen Jane, who is the influencer and the charges on the...
18:48 Sebastian Vettel's Greatest Races
BIST
1129
GOLD
457.514
USD
7.6270
GPB
9.7726
EUR
8.8668
Breaking News
Top 3 Career Path Options for Business Analysts Preview
Close

TALLAHASSEE — When Gov. Rick Scott steps to the rostrum Tuesday to open the 2017 session of the Florida Legislature, the moment will also signify something else: two decades of Republican control of the state Capitol.8 Months Ago8 Months Ago6 Months AgoBut... 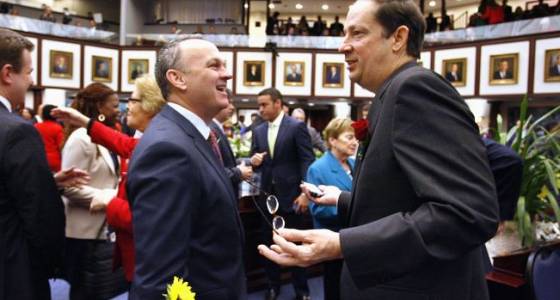 TALLAHASSEE — When Gov. Rick Scott steps to the rostrum Tuesday to open the 2017 session of the Florida Legislature, the moment will also signify something else: two decades of Republican control of the state Capitol.

But this is no time for celebrating.

Scott and his fellow Republicans are embroiled in an uncivil war as ugly as anything the state has seen in a long time.

It's a mean-spirited, marathon battle that could derail everyone's priorities in a session with a to-do list that includes a long-term land-buying plan to clean up the Everglades, expanding legalized medical marijuana, rewriting juvenile justice laws and fixing a flawed death penalty. That's in addition to the annual wrestling matches over guns, gambling, taxes and spending.

At the center of the storm are Scott and House speaker Richard Corcoran, a lawyer from Land O'Lakes.

Both men have abandoned direct communication in favor of media stunts. Corcoran calls out "corruption" in state government with publicly funded slash-and-burn videos. Scott blasts fellow Republicans with campaign-style robo-calls and a Facebook video that called Corcoran a "career politician."

On the surface, the clash between the speaker and the governor is over a narrow question of how much tax money the state should spend to attract jobs and tourists. But that accounts for less than one-tenth of 1 percent of the $82 billion state budget.

Scott has spent a lot of political capital defending Enterprise Florida and Visit Florida in the face of Corcoran's relentless criticism of both programs as wasteful and inefficient examples of "corporate welfare."

But this confrontation goes deeper.

It involves philosophical differences, personal animosity and political ambition, all of which have had a state capital teetering on the edge of dysfunction for weeks.

Scott and Corcoran are scheduled to be out of office in 2018. Both men have higher political ambitions. Both can be stubborn.

Scott may run against U.S. Sen. Bill Nelson, the last remaining Democrat to hold statewide office. Corcoran is considering running for governor, and his stand has the support of a well-financed interest group, Americans for Prosperity.

It means that every round between Scott and Corcoran is another chance to appeal to a constituency that can help in the 2018 election, so their every move is seen through that prism, and they can't escape it.

The dogwoods may be about to bloom in Tallahassee, but it's not the genteel southern town it used to be — though Senate President Joe Negron, R-Stuart, the third and least combative member of the triumvirate that runs the Capitol, has managed to dodge the fireworks.

Everyone knows more clashes are coming.

Scott's priorities, including $618 million in tax cuts and more money for school via local property taxes, also are in trouble.

"That's a hell, no," Corcoran said in a Times/Herald interview, repeating his words for emphasis.

Property values are rising, which Scott says is a good thing. But when that happens, property tax revenue rises, even if the tax rate doesn't.

Is it a tax increase?

Corcoran says yes. Scott says no. The Senate agrees with the governor.

In his seventh year in office, Scott faces growing hostility from lawmakers in his party.

Scott, who first ran as an outsider in 2010 and is the first CEO to be governor, had no qualms about calling out "absurd" Republican lawmakers for "hypocrisy at its best" and "playing games" with tourism and job creation.

But when Scott went to Panama City to vilify Rep. Jay Trumbull, some say he might have gone too far.

Former Senate President Don Gaetz of Destin, who represented Panama City before he left office in November, said that while Scott has been popular there, Trumbull's constituents won't appreciate a local leader being held up to ridicule.

"It's dangerous business to do that," said Gaetz, who clashed with Scott on a number of issues. "It's a round world," Gaetz said, meaning that Scott will one day return to Panama City as a Senate candidate, seeking support from Trumbull and his friends, who might not be forgiving.

It's true that other governors have played rough with lawmakers in their own party.

But it's rare, such as the time Jeb Bush went to Sun City Center near Tampa in 2003 and called out "wandering senators" by name for opposing him, and siding with lawyers, in a marathon fight over medical malpractice reform.

Scott shows little knowledge of or interest in Florida's colorful political history, but he would be wise to study it.

But in his first State of the State address in 1991, the folksy Chiles, Florida's last elected Democratic governor, memorably held up a three-legged milking stool to symbolize the need for three-way cooperation among the governor and a bicameral Legislature.

"We need each other," Chiles told them.

In today's arena, it's more like every man for himself.

A Harvard political scientist, V.O. Key, who decades ago wrote a book about Southern politics, would have no trouble recognizing the Florida of today.

"Loyalties have not been built up," Key wrote in 1949. "Traditional habits of action with respect to social personages, leaders and parties have not been acquired. Flux, fluidity and uncertainty in human relations are the rule."

In the Chiles years, Democrats kept on fighting with each other as their majorities dwindled and as lawmakers motivated by self-interest forged alliances with Republicans to survive.

Consumed by their own civil war, Democrats lost the Senate in 1994 and the House in 1996, and Jeb Bush completed the Republican takeover in 1998.

Republicans should be concerned, as the reverse could happen.

The political wars of today are more brutal and more personal, and they never seem to end.

The three-legged stool is out. The tweet storm is in.

Term limits, social media and the endless news cycle have turned up the speed and volume so that any aggrieved politician feels the need to punch back as fast and as forcefully as possible, escalating tensions ever higher.

"Forgive the upcoming tweet storm," Corcoran said he as fired a series of 12 tweets, listing every proposed change to improve the tourism agency. "U be the judge," he wrote.

No one punches harder than Corcoran, a former Republican operative with a trial lawyer's zeal for verbal combat.

"He's the least likely public official to compromise for compromise sake," said Republican Sen. Tom Lee of Thonotosassa, who negotiated the past two state budgets with Corcoran, sometimes over Cabernet Sauvignon and a cigar.

Lee, a former Senate president who's now in his 15th year in office, issued an ominous prediction about Corcoran.

"We won't go home for a good long while," Lee said.