Flu cases up around Maryland as winter comes to a close

Temperatures have been rising around the state, and it's not a good thing.The flu, and its telltale fever, is now widespread in Maryland, as it is in much of the nation, according to health officials who are logging a lot of doctor and emergency room visits... 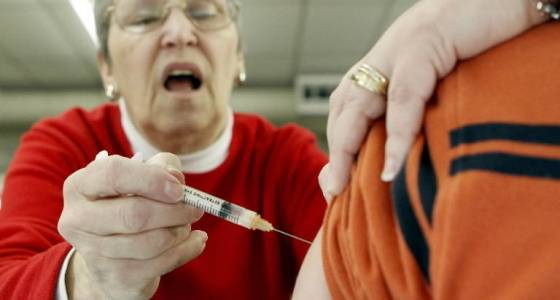 Temperatures have been rising around the state, and it's not a good thing.

The flu, and its telltale fever, is now widespread in Maryland, as it is in much of the nation, according to health officials who are logging a lot of doctor and emergency room visits during an unseasonably warm stretch of winter.

Several hospitals — including Anne Arundel Medical Center, Upper Chesapeake Medical Center and the University of Maryland Medical Center — are trying to keep the highly contagious virus from infecting vulnerable patients by limiting visits by children and those with flu symptoms such as a runny nose, cough and fever.

Other hospitals have reported increases in people seeking treatment in the last two weeks but haven't limited visitors.

"We're definitely seeing an increase in cases," said Dr. Aaron Milstone, a pediatric infectious disease specialist at the Johns Hopkins Children's Center. "We never know when that will happen each season. February is average, though when we're having 70-degree days, we don't expect to see a surge in influenza."

As they sat for haircuts, the men talked trash and watched movies on the television.

It seemed just like any afternoon at the New Beginnings Unisex Barbershop in West Baltimore, but throughout the shop men — and a few women — got their blood pressure and weight checked, sat for flu shots, picked...

As they sat for haircuts, the men talked trash and watched movies on the television.

It seemed just like any afternoon at the New Beginnings Unisex Barbershop in West Baltimore, but throughout the shop men — and a few women — got their blood pressure and weight checked, sat for flu shots, picked...

Milstone said normally winter is associated with flu because people are inside more and the virus spreads more easily when people are in close quarters. It's not clear why the virus is ramping up now, or how long the uptick will last, he said.

One thing is certain based on the dozens of children coming to the hospital daily, Milstone said: "It's going to be a big flu season."

Some people, however, might note have realize they have the flu during the recent warm spell.

Nikia Howard, a Baltimore City waitress, said she awoke with intense body aches last week and then got hot and cold flashes. She said she had gotten her annual flu shot and knew no one with the flu. Concerned about her health, she went to the emergency room at St. Agnes Hospital.

"How could it be flu when it's so warm?" Howard said she thought as a doctor at the hospital gave her the diagnosis. "But it did feel like the flu. I was so weak and tired. It's a nasty illness."

The state Department of Health and Mental Hygiene collects flu data through a network of doctors and hospitals that reported more than 19,400 people had gone to emergency rooms with "influenza-like illness," or symptoms of the flu, since the beginning of October. About 1,866 went to emergency rooms during the week ending Feb. 11, the latest period for which data is available.

Doctors around the state also report they've seen hundreds of cases in their offices.

Dr. Timothy Carle, a regional medical director for MedStar PromptCare in Bel Air and Federal Hill, said perhaps more people have caught the flu in the last couple of weeks because the mild weather has led to more gatherings. And children also are in school no matter the temperature, where they tend to share belongings and food, and pass viruses.

People can be contagious a day before symptoms appear and for five to seven days after, Carle said.

"People feel better, and go to school or church or wherever before they are fully recovered," he said.

Carle said that makes it important for people to cover their mouths when they cough, or sneeze into a sleeve or a tissue to protect others, and to wash hands frequently to protect themselves.

Most people are not tested for the virus, so there is no accurate count of flu cases in adults. Among children, who are more often tested, 29 have died nationwide so far this year from flu complications, according to the U.S. Centers for Disease Control and Prevention. Doctors knew of no child deaths in Maryland.

The CDC estimates thousands of people die every year from flu complications such as pneumonia. Many are elderly or suffering with underlying health conditions, but healthy people can also become extremely sick and die, doctors say.

There is little treatment for the virus, and most medical providers recommend riding out the week at home, resting and drinking lots of fluids. Doctor visits are appropriate for those at high risk of complications such as seniors, children, pregnant women and those with medical conditions.

Antiviral medication may lesson symptoms if given early in the illness.

For healthy people, an emergency room visit is typically only necessary for children with rapid or troubled breathing, bluish skin color, dehydration, extreme irritability or lethargy, fever with a rash, or flu symptoms that improve but then return. Emergency visits are recommended when adults have trouble breathing, chest or abdominal pain, sudden dizziness, confusion or severe or persistent vomiting.

Early data from the CDC show the annual flu vaccine is not a perfect match, but it reduces a person's risk of getting sick by close to 50 percent. The Maryland physicians say that the flu season can last through May and vaccine is still available in many doctors' offices, retail outlets and health departments.