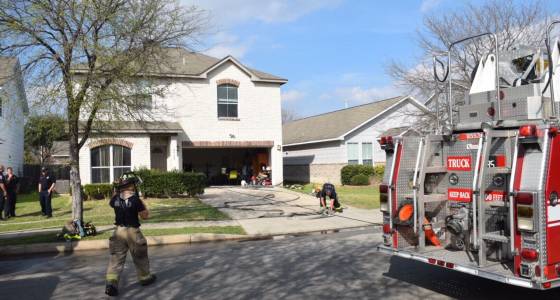 San Antonio firefighters battled a house fire on the far West Side Monday afternoon, Feb. 27, 2017. There were no injuries.

San Antonio firefighters battled a house fire on the far West Side Monday afternoon, Feb. 27, 2017. There were no injuries.

Firefighters on Monday responded to a house in the Far West Side after a blaze ignited in one of the closets.

Battalion Chief Tom McNulty said firefighters were called to the home in the 8700 block of Ansley Bend Drive around 3:10 p.m. and knocked down a small fire in a closet within 15 minutes.

Three people were inside the home at the time of the fire. There were no injuries.

Residents of the home, who declined to be identified, said they didn't know what caused the fire, but that it occurred on the second floor.

"It would be very easily explainable," McNulty said. "We'll see."

McNulty said the residents hadn't given firefighters any clue as to how the fire could have started.

Arson investigators were called to the scene to investigate.