CaptionCloseSAN ANTONIO -- A family will likely be displaced from their home after a blaze started in their laundry room Tuesday on the East Side near downtown, fire officials saidAt least 11 units responded shortly after 11:15 a.m. Tuesday in the 600 block... 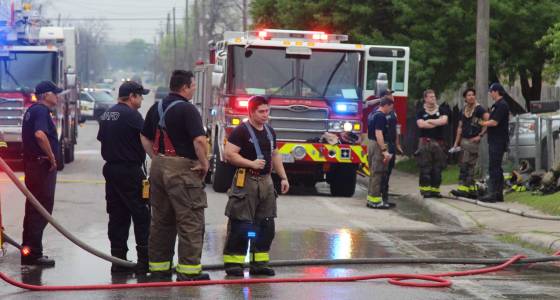 SAN ANTONIO -- A family will likely be displaced from their home after a blaze started in their laundry room Tuesday on the East Side near downtown, fire officials said

At least 11 units responded shortly after 11:15 a.m. Tuesday in the 600 block of South Pine Street, where a fire started in the laundry room near the back of the home, said SAFD Capt. Carl Tyson.

RELATED: Apartment with 'too many people' catches fire on North Side.

Firefighters quickly knocked down the blaze, but there was fire damage to the back and about $10,000 in smoke damage to the rest of the house, Tyson said.

The cause of the fire has yet to be determined.