April Bradley never imagined she'd be where she is today: picking out paint colors and furniture for a Baltimore rowhouse with her name on the property title.Six years ago, Bradley was a 27-year-old single mother more concerned about paying the monthly bills... 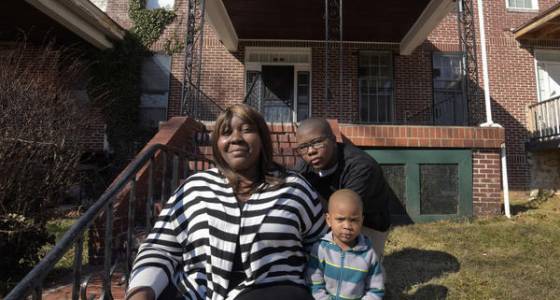 April Bradley never imagined she'd be where she is today: picking out paint colors and furniture for a Baltimore rowhouse with her name on the property title.

Six years ago, Bradley was a 27-year-old single mother more concerned about paying the monthly bills and making rent than whether she'd ever own a home, send her son to college or retire.

That changed when she turned to Baltimore CASH Campaign, a financial services nonprofit that Bradley had heard was doing taxes for free. The organization's volunteers convinced Bradley to use part of her tax refund to buy savings bonds, and she made it a habit.

Financial education advocates see tax season as an opportunity to help nonsavers start new saving habits. More than 70 percent of people who file taxes are expected to get money back. Last year, the average refund was $3,120, but low-income workers who qualify for the Earned Income Tax Credit could receive twice as much. Many people stand to receive a cash windfall, and advocates are encouraging them to invest or save part of their refund.

They say such efforts are especially important in cities like Baltimore, where about a quarter of residents don't have bank accounts or lack access to full financial services, and instead rely on cash checking services, payday loans and pawnshops.

With the help of social media, Adidas seems to be making a comeback among young consumers. (Barbara Haddock Taylor/Baltimore Sun video)

With the help of social media, Adidas seems to be making a comeback among young consumers. (Barbara Haddock Taylor/Baltimore Sun video)

"When people have this windfall of money, they view it as found money," said Sara Johnson, the director of the Baltimore CASH Campaign. "Giving them options for what to do with it and encouraging them to save some of it is really important."

Six years ago, Bradley was just like millions of Americans who don't save, either because they think their monthly budget is too tight or they are new to the workforce and not sure how to get started. Some can't open accounts at traditional financial institutions because of past offenses such as writing bad checks.

Bradley parlayed her savings habit into her now home, a three-bedroom, two-bathroom center unit in Forest Park. She cashed in her savings bonds in December and bought it outright.

It's far from her dream home — the water tank broke within two weeks of moving in — but it's proof that she has control over her future.

"I was still so happy, even without hot water, knowing this house is mine," Bradley said. "No one can come and take it from me."

Baltimore CASH Campaign heads into tax season like an army heading into battle, deploying more than 240 volunteer tax preparers and financial planners to makeshift tax preparation offices in 15 churches, schools and community centers around the Baltimore area. Last year, they spent about 3,700 hours helping families with household incomes of less than $54,000 file their taxes for free, and expect to put in about as much time before the sun sets on the 2017 tax season. The 2017 deadline for federal and Maryland taxes is April 18.

They come armed with an arsenal of financial products people can use to save a portion of their tax refund, such as savings bonds, pre-paid debit cards and an offer to open a savings account with MECU, the Municipal Employee Credit Union.

Earlier this month, America Saves, a financial literacy initiative of the Consumer Federation of America, and NACHA, an electronic payment trade association, launched a "Split to Save" campaign, encouraging taxpayers to use Form 8888 to split their refund between checking and savings accounts.

Working families with income below $53,505 can qualify for the Earned Income Tax Credit. The amount of the credit depends on family size and income, but can be worth up to $6,269.

For many families, a check that size is "the biggest influx of money they'll receive in a year," said Lindsay Ferguson, the outreach manager for America Saves.

The U.S. Treasury Department is partnering with tax preparation software providers TaxAct, TaxSlayer and TurboTax to direct people to the website for myRA, the agency's retirement savings account that does not have a minimum deposit requirement.

"For many hard-working Americans, the hardest part about saving is simply taking that first step," said Rob Gettemy, chief operating officer at TaxAct, in a statement announcing the partnership. "Helping them use that money for a better financial future, with no risk, is an incredible opportunity."

Financial advisers target tax season as an opportunity to talk about savings because they know it's a time of year when people may have a little more cash to work with. But their goal is to educate people about how to make saving a routine.

"For a lot of the families we're serving, it's a cash flow problem. They're deeply in debt and I think feeling like they can't afford to saving anything," the CASH Campaign's Johnson said. "Trying to help people understand that even if it's a little bit, a small amount — $5 here, $10 there — it's going to make a difference in the long run."

A survey released earlier this month by Bankrate, a consumer financial services firm, found that most Americans are not making progress in boosting their emergency funds, even though they increasingly are aware of the importance of saving.

The trend shows that people need help acting on the desire to save, McBride said. He echoed other experts' sentiment that tax season, when people already are thinking about finance and have an influx of cash, is a good time to clean up their financial situation.

Automatically depositing some money from each paycheck in a savings account is another good way to save.

"If you wait until the end of the month and try to save what's left over — well, there's not going to be anything left over," McBride said.

Paying down credit card debt is also an important step toward more stable financial footing, and another good use of a tax refund check, experts said.

Credit card debt typically has a high interest rate and can damage people's credit rating, which affects whether they can qualify for a mortgage or other loan, and helps determine what interest rate they pay, said Judith Ward, senior financial planner for T. Rowe Price Investment Services.

"It's tempting to just go blow that tax refund on that shiny new thing you want — that's what everyone wants to do," Ward said. "But there may be some things that aren't as exciting, but can set you up for a better financial future."