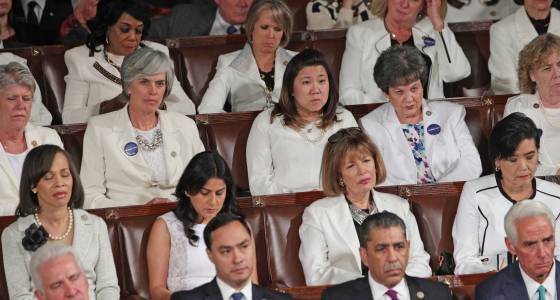 “For tonight’s #JointSession, our suffragette white represents our commitment to defending women’s rights now and always,” Meng tweeted before the speech.

The move made for an elegant statement, one colleague said.

“I thought it was a nice touch — a delicate touch of class,” New York Rep. Adriano Espaillat told The Post.

The look was a throwback to women who donned white during demonstrations demanding the right to vote in the early 1900s. And Hillary Clinton wore a white pantsuit when she accepted the Democratic nomination for president last summer.

But not all the protests were so silent. Democratic lawmakers chuckled when Trump invoked his campaign promise to “drain the swamp” of Beltway insiders.

Among them was Florida Rep. Ted Deutch, who said the President should address his potential business conflicts before criticizing others.

“If he wanted to drain the swamp, he should focus on what he does first,” Deutch told The Post.