Gary Solomon, a key conspirator in the federal bribery scandal that brought down former Chicago Public Schools CEO Barbara Byrd-Bennett, was "the mastermind of the corrupt arrangement" and should be sentenced to nine years in prison, federal prosecutors... 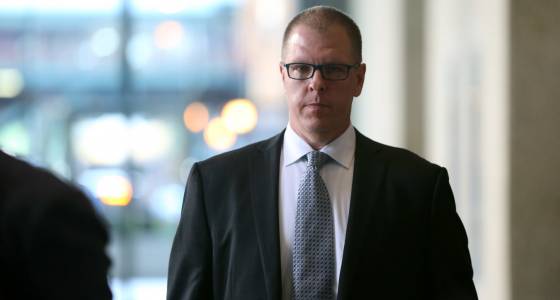 Gary Solomon, a key conspirator in the federal bribery scandal that brought down former Chicago Public Schools CEO Barbara Byrd-Bennett, was "the mastermind of the corrupt arrangement" and should be sentenced to nine years in prison, federal prosecutors said Wednesday.

"His numerous acts of corruption, deceit, and obstruction were not the result of a momentary lapse in judgment," prosecutors said in their sentencing memorandum. "They were not isolated acts constituting aberrant behavior. Instead, they were part of a pattern of corruption that he engaged in over an extended period of time."

Solomon's attorneys, in their pre-sentencing memo, argued their client has cooperated with prosecutors, shown remorse and should face no more than 18 months in prison.

Solomon is scheduled to be sentenced later this month for his role in a corruption case that rocked Mayor Rahm Emanuel's administration and the city's troubled school system. The co-owner of the SUPES Academy and Synesi Associates education consulting companies, Solomon was charged in October 2015 with multiple fraud and bribery charges.

He pleaded guilty to a single count of wire fraud last year and admitted his role in a scheme to bribe Byrd-Bennett with a percentage of the value of contracts the then-CPS CEO steered to the education consulting companies.

Byrd-Bennett, Emanuel's hand-picked schools chief, pleaded guilty shortly after being indicted to a single felony count of wire fraud for steering multimillion-dollar no-bid contracts to Solomon and his firms in exchange for the promise of up to $2.3 million in kickbacks.

Prosecutors indicated in Wednesday's filing that they expect to request a seven-and-a-half year sentence for Byrd-Bennett.

Prosecutors acknowledged that Byrd-Bennett lied to FBI agents when they first approached her in April 2015 while executing search warrants at her Ohio home and offices belonging to the SUPES entities. She also "lied and minimized her conduct" initially with the government, before reversing course and testifying before a grand jury in June 2015.

In Solomon's defense filing, attorneys pointed to a number of "uniquely mitigating circumstances," including former Chicago Board of Education President David Vitale's defense of the training contracts at the core of the government's indictments.

The filing tries to shift much of the blame for the case to Byrd-Bennett. "To the extent that anyone 'engineered' (the government's word) a bribe, it was Bennett, not Gary, because Bennett repeatedly and aggressively pursued a firm commitment relating to her compensation," the defense filing said.

Prosecutors dismissed those efforts, and said Solomon "disputes the scope of the scheme and the significance of his role."

"Solomon made more money than anyone else, yet he is trying to apportion blame and economic responsibility equally to deflect attention from his dominating role in the scheme. He profited the most from this corruption, and he should pay the most," the government's filing said.

The SUPES and Synesi companies were charged as part of the original 23-count indictment prosecutors leveled against Byrd-Bennett, Solomon and co-owner Thomas Vranas in 2015.

Guilty pleas from each company for one count of wire fraud have also been entered, and U.S. Attorney Zachary Fardon's office said each company could face fines as high as $6.4 million, plus a total of $254,000 in restitution that Solomon and his co-defendants would collectively pay to the school district.