Manuel Ramirez (left) and Norberto Ramirez. (Essex County Correctional Facility)  NEWARK -- A father and son are facing drug charges after a raid by sheriff's detectives on a city bodega Saturday turned up pot, cocaine and pills, according to investigators.... 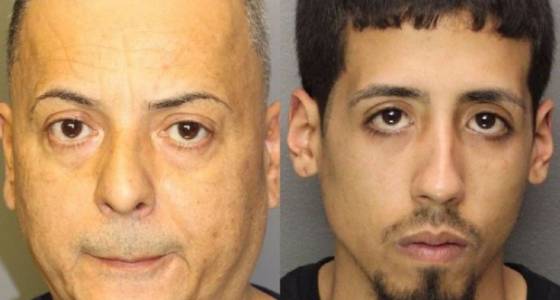 
NEWARK -- A father and son are facing drug charges after a raid by sheriff's detectives on a city bodega Saturday turned up pot, cocaine and pills, according to investigators.

Manuel Ramirez, 49, and his son Norberto, 23, were arrested after officers from the Essex County Sheriff's Office Bureau of Narcotics served a search warrant at the Mr. Mini Mart store at 534 Broadway, according to a statement from Sheriff Armando Fontoura.

Prior to entering the store, officers conducting surveillance saw Manuel Ramirez remove a black bag from a nearby parked car and place it behind the store's counter, the statement said.

After moving in to detain Ramirez, the statement said, officers forced their way into the residential part of the building and found Norberto standing in a hallway.

The younger Ramirez threw down another plastic bag into a nearby bedroom and attempted to flee the scene, but was immediately taken into custody, according to the Sheriff's Office.

The Sheriff's Office estimated the seized drugs were worth $9,000 on the street, and said the bodega was found to be ringed with surveillance cameras with DVD recorders and video displays.

Jail records show both men were booked into the Essex County Correctional Facility and later released.

Thomas Moriarty may be reached at tmoriarty@njadvancemedia.com. Follow him on Twitter at @ThomasDMoriarty. Find NJ.com on Face