HOUSTON – Mere moments after his team scored 130 points Saturday night in Houston and still lost, young Timberwolves star Karl-Anthony Towns stripped off his uniform, pulled on a practice jersey and headed down an arena corridor to a weight room, where... 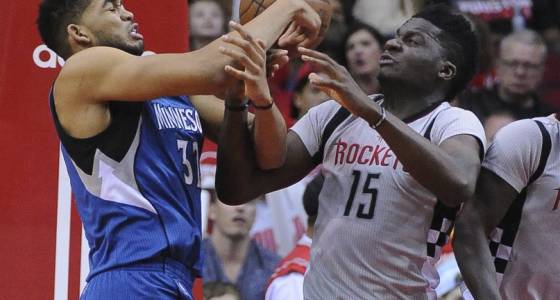 HOUSTON – Mere moments after his team scored 130 points Saturday night in Houston and still lost, young Timberwolves star Karl-Anthony Towns stripped off his uniform, pulled on a practice jersey and headed down an arena corridor to a weight room, where he clanged and banged the defeat away.

Twenty minutes later, after most of his teammates had already showered and departed, Towns returned to his team’s locker room, sweaty and drained.

“Very rarely,” he said Saturday night when asked if he often lifts weights immediately after a game. “But today was one of those days. I was a little extra mad.”

He vented his frustration over an evening when the Wolves won the battles in rebounding (58-31), second-chance points (29-15) and points in the paint (68-44) and yet succumbed to a Rockets team that hoisted 58 three-point attempts and made 22.

That 66-27 scoring disparity on three-pointers and the Wolves’ 25 turnovers outdid Towns’ 37-point, 22-rebound performance and teammate Andrew Wiggins’ 17th consecutive game with 20 or more points, surpassing Kevin Garnett for most in franchise history.

Towns owns a streak of 20-point games himself, 14 of them now and counting after Saturday’s game. That’s behind only Wiggins, Garnett and Kevin Love in team history.

“We lost,” Towns said. “Those stats don’t mean nothing.”

The clock ticks on the Wolves’ playoff chances after they squandered a chance Saturday to get closer to the Western Conference’s eighth and final playoff spot, with only 23 games now remaining.

They trail Denver by three games after the Nuggets lost to Memphis Sunday afternoon.

“We’ve got to win,” Towns said. “We’ve got great opportunities.”

So with Saturday’s opportunity gone, Towns went back to work immediately after the game.

“We lost, there’s no time to be pouting and everything,” Towns said. “I’ve got to continue to work hard.”

Did he vent his frustrations sufficiently?

“Yeah, I’m tired,” he said. “You can see it in my face. I went straight in here after the game, took my game clothes off, put some practice gear on and went right to lifting. Yeah, I’m pretty tired.”

When push comes to …

The two tangled after an official whistled Rubio for a charging foul and Rubio held the ball away from Beverley, who made pointedly reach to get it back for his team. The two players stared each other down and Beverley shoved Rubio away.

“He always try to play that game and that’s it,” Rubio said when asked about the incident. “He’s that type of player.”

Said Wiggins of the kerfuffle: “Basketball is a competitive game. There are going to be people who get into it. That’s part of it.”

One night after Towns had seven of them against Dallas, Wiggins had six of the Wolves’ 25 turnovers in Houston. Rubio had six of his own as well.

Asked if his six were more his doing or the Rockets defense, Wiggins said, “Bad decisions. I don’t think it was them. I had a lot of turnovers. After I passed the ball, I was like, `What was I doing?’ It was more on us than them.”

• Towns on 130 not being enough after Houston came within three shots of tying a franchise record by shooting 58 threes: “It’s a lot of points. You can’t make excuses. You’ve got to stop people. We’ve got to make it harder on them to shoot those shots.”