President Donald Trump told major U.S. health insurers at a White House meeting today to expect “something special” to replace Obamacare, as the administration gets more involved in Republican efforts to repeal the health-care law.“We’re... 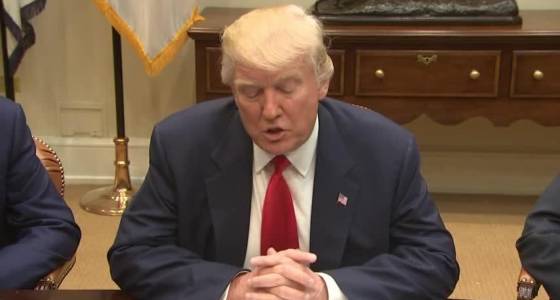 President Donald Trump told major U.S. health insurers at a White House meeting today to expect “something special” to replace Obamacare, as the administration gets more involved in Republican efforts to repeal the health-care law.

“We’re going to be talking about it tomorrow night during the speech,” Trump said, referring to a joint address to Congress scheduled for Tuesday. “I think you’ll like what you hear.”

The session is a chance for the industry to weigh in on the Affordable Care Act, the 2010 health law also known as Obamacare. Trump, Health and Human Services Secretary Tom Price, and congressional leaders are trying to figure out how to fulfill their pledge of repealing the law, which extended health insurance to about 20 million people, and designing a replacement.

America’s Health Insurance Plans, an industry lobby group, said in a statement before the session that insurers are looking forward to talking about “how we can best ensure every American has affordable coverage and access to quality care.”

There’s been a renewed focus by the administration on health care, after initial promises to make it a priority for the first days of the Trump White House seemed to slow. Trump plans to discuss health care in his address to Congress tomorrow night, and the ACA has also been a key topic in his discussions with governors, who are currently in Washington for the their national association’s winter meeting.

“I’m going to have a speech on Tuesday night and we are going to be speaking very specifically about a very complicated subject,” Trump told governors Sunday evening. “Everyone is different, every state is different and different requirements, but I think we have something that is really going to be excellent.”

At a separate meeting Saturday to talk about health care, governors were told of big cuts to the Medicaid health program for the poor and to the ACA’s individual market that could come from decisions tied to repealing the ACA. Congressional leaders are still working on their plans, and haven’t yet unveiled specifics.

Asked whether Trump can guarantee that no one will lose coverage under his plan to replace Obamacare, White House spokeswoman Sarah Huckabee Sanders said that was the aspiration.

“The goal is that we make sure that people don’t lose their coverage and that we have to put a high priority on people that need it most,” Sanders said on ABC’s This Week program Sunday.