"Chicago -- the only place where you can have all four seasons in one week."Well, maybe not all seasons as claimed in the Facebook meme making the rounds, but February's weather was some of the strangest in the area's history.February was one of the warmest... 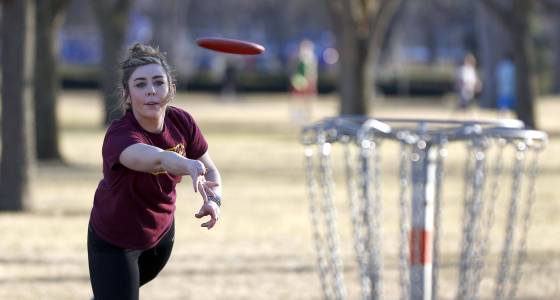 "Chicago -- the only place where you can have all four seasons in one week."

Well, maybe not all seasons as claimed in the Facebook meme making the rounds, but February's weather was some of the strangest in the area's history.

February was one of the warmest ever, breaking dozens of records with a stretch of temperatures that hovered around 70 degrees, according to the National Weather Service.

There hasn't been measurable snow since Christmas, marking the first time in 146 years (since records first were kept) that there's been no snow on the ground in January and February, the weather service said.

"You just have to be ready for anything around here," said Wilhelmina Pomrehn of Elmhurst, who described herself as a Weather Channel addict. "I think everyone's kind of bracing themselves for a huge snowstorm now. Baseball season may suffer."

That's unlikely, says AccuWeather senior meteorologist Bob Smerbeck. Constant storms in the Pacific Ocean are to blame (or thank) for this warm February. Jet streams moving across the West Coast and the Midwest prevent Arctic air from sinking to Chicago, keeping it too warm for snow.

"It's probably going to be mild for the rest of the winter," Smerbeck said. "The way this pattern is going this year, the probability is low (for a snowstorm), but it's not completely out of the question."

Amy Seeley, a meteorologist at the National Weather Service in Romeoville, thinks people shouldn't read too much into February's strange weather. She recalled that February 2015 was one of the coldest on record, March 2012 was the warmest on record, and there was a tornado in McHenry County in January 2008.

The springlike winter has been a delight for dog walkers, runners and bikers. People across the suburbs fired up their grills and fire pits. Kids wore shorts to school, and frozen yogurt stores had customers in a what's typically a slow-business month.

Many snowbirds and travelers were discouraged to find the weather in Chicago was better than in the places they went to escape winter. Pomrehn and her husband were in California to run the Palm Desert Half Marathon, where it was in the 50s and raining, while it was sunny and 70 in Chicago.

Pomrehn said the unseasonably warm weather made her marathon training much more tolerable. Her neighbor who built an ice rink for the winter is not as pleased, however.

"There were moments when they could use it ... but I think she's thrown her arms up and said, 'That's it. Honey, get the basketball out,'" she said. "For me, this is fantastic."