WASHINGTON -- Here are excepts from President Donald Trump's speech Tuesday night to a joint session of Congress. "Each American generation passes the torch of truth, liberty and justice -  in an unbroken chain all the way down to the present. ... 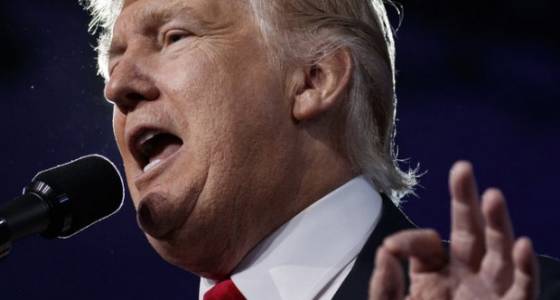 "Each American generation passes the torch of truth, liberty and justice -  in an unbroken chain all the way down to the present.

And we've spent trillions of dollars overseas, while our infrastructure at home has so badly crumbled.

We have begun to drain the swamp of government corruption by imposing a 5-year ban on lobbying by executive branch officials - and a lifetime ban on becoming lobbyists for a foreign government."

7 questions for Trump to answer

"By finally enforcing our immigration laws, we will raise wages, help the unemployed, save billions of dollars, and make our communities safer for everyone.

As promised, I directed the Department of Defense to develop a plan to demolish and destroy ISIS - a network of lawless savages that have slaughtered Muslims and Christians, and men, women, and children of all faiths and beliefs.

We will work with our allies, including our friends and allies in the Muslim World, to extinguish this vile enemy from our planet.

My economic team is developing historic tax reform that will reduce the tax rate on our companies so they can compete and thrive anywhere and with anyone.

At the same time, we will provide massive tax relief for the middle class

Tonight, I am also calling on this Congress to repeal and replace Obamacare, with reforms that expand choice, increase access, lower costs, and at the same time, provide better Healthcare.

Mandating every American to buy government-approved health insurance was never the right solution for America.

Obamacare is collapsing - and we must act decisively to protect all Americans.  Action is not a choice - it is a necessity.

So I am calling on all Democrats and Republicans in Congress to work with us to save Americans from this imploding Obamacare disaster.

My administration wants to work with members in both parties to make childcare accessible and affordable, to help ensure new parents have paid family leave, to invest in women's health, and to promote clean air and clear water, and to rebuild our military and our infrastructure.

True love for our people requires us to find common ground, to advance the common good, and to cooperate on behalf of every American child who deserves a brighter future.

Today is Rare Disease Day, and joining us in the gallery is a Rare Disease Survivor, Megan Crowley. Megan was diagnosed with Pompe Disease, a rare and serious illness when she was 15 months old. She was not expected to live past 5.

On receiving this news, Megan's dad, John, fought with everything he had to save the life of his precious child. He founded a company to look for a cure, and helped develop the drug that saved Megan's life. Today she is 20 years old--and a sophomore at Notre Dame. Megan's story is about the unbounded power of a father's love for a daughter.

Finally, to keep America safe we must provide the men and women of the United States military with the tools they need to prevent war and - if they must - to fight and to win.

I am sending Congress a budget that rebuilds the military, eliminates the defense sequester, and calls for one of the largest increases in national defense spending in American history.

My budget will also increase funding for our veterans. Our Veterans have delivered for this nation - and now we must deliver for them

The challenges we face as a nation are great.

But our people are even greater.

And none are greater or braver than those who fight for America in uniform.

But we know that America is better off, when there is less conflict -- not more.

We must learn from the mistakes of the past - we have seen the war and destruction that have raged across our world.

The only long-term solution for these humanitarian disasters is to create the conditions where displaced persons can safely return home and begin the long process of rebuilding.

America is willing to find new friends, and to forge new partnerships, where shared interests align.

Think of the marvels we can achieve if we simply set free the dreams of our people.

Cures to illnesses that have always plagued us are not too much to hope.

American footprints on distant worlds are not too big a dream.

Millions lifted from welfare to work is not too much to expect.

And streets where mothers are safe from fear--schools where children learn in peace--and jobs where Americans prosper and grow--are not too much to ask.

When we have all of this, we will have made America greater than ever before.

The time for small thinking is over.

The time for trivial fights is behind us.

We just need the courage to share the dreams that fill our hearts.

The bravery to express the hopes that stir our souls.

And the confidence to turn those hopes and dreams to action.

From now on, America will be empowered by our aspirations - not burdened by our fears."