A man prosecutors say paid a $15,000 bribe to Cook County Circuit Court Clerk Dorothy Brown to secure a job was sentenced to 3 years of probation Monday for lying to a federal grand jury investigating pay-to-play allegations in Brown's office.Before the... 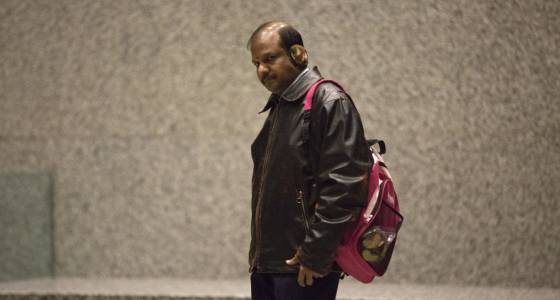 A man prosecutors say paid a $15,000 bribe to Cook County Circuit Court Clerk Dorothy Brown to secure a job was sentenced to 3 years of probation Monday for lying to a federal grand jury investigating pay-to-play allegations in Brown's office.

Before the sentence was handed down, the former employee, Sivasubramani Rajaram, told the judge he lied to the grand jury because he feared retaliation from Brown and other high-ranking members of the circuit clerk's office.

"These were high-powered people politically," Rajaram told U.S. District Judge Sharon Johnson Coleman. "My motivation is to protect myself and my family, nothing else."

Rajaram said he suffered a nervous breakdown and was hospitalized last year after considering going back before the grand jury to testify under a grant of immunity from additional prosecution. But that return trip to the grand jury never happened, prosecutors said.

Prosecutors had sought 15 months in prison for Rajaram, while his attorney, Robert Gevirtz, asked for probation

Rajaram, 48, of Des Plaines, pleaded guilty last year to one count of perjury, admitting in a plea agreement with prosecutors that he falsely testified that he had not talked with Brown after his 2014 hiring. He also acknowledged lying to the grand jury when he said he had spoken only "three or four times" to another high-ranking clerk's office employee — identified by prosecutors only as Individual B.

Coleman allowed the defense to file its entire sentencing memorandum under seal, going against long precedent in Chicago's federal court. Court records show Gevirtz also had taken the extraordinary step of seeking to close the sentencing hearing to the public, but the judge denied that request.

In a Feb. 17 filing, prosecutors alleged for the first time that Brown had exchanged numerous phone calls and text messages with Rajaram around the time he "loaned" $15,000 to Goat Masters Corp., a goat meat supply company Brown and her husband, Benton Cook III, had recently founded.

Individual B had "suggested" Rajaram make the loan to Brown in order to be hired and then helped him get the money to Brown's company, prosecutors said.

The filing also alleged Brown had solicited and received an additional $10,000 loan for the same company from a "senior-level" employee of the clerk's office.

By lying to the grand jury, Rajaram not only sought to protect himself and his job but also to divert the investigation into Brown, Assistant U.S. Attorney Heather McShain wrote.

"The effect of defendant's lies was to hide his own criminality — in paying a bribe to a public official to obtain a job and cheat honest applicants from obtaining that position — and divert attention from (Brown) and Individual B," McShain said.

Brown's criminal defense attorney, Edward Genson, said earlier this month the money paid by Rajaram was a legitimate loan that had "nothing to do" with his hiring.

"It certainly wasn't a bribe," said Genson, adding that the money has since been paid back.

Grand jury transcripts provided in the prosecution filing show Rajaram testified he knew Individual B from a previous stint in the clerk's office that ended when he moved to India in 2010.

The transcripts show Rajaram testified he'd seen Brown at several of her clerk's office functions, including at a staff picnic and an American Heritage Month event at Daley Plaza, but he denied talking to her. He also falsely testified that he had spoken to Individual B only "three or four times" and that none of those conversations was by phone.

Asked if he'd ever had a conversation with Brown at all — by phone or in person — about his application, Rajaram answered, "No," according to the transcript.

A few weeks after Rajaram's false testimony, Brown's cellphone was seized by the FBI. Brown had his number stored in her contacts list and had exchanged 26 text messages with Rajaram between August 2014 and January 2015, according to the filing. She also made three outgoing calls to Rajaram's cellphone and received two incoming calls from him.

In one text, Rajaram wished Brown a happy birthday "and many happy returns of the day," signing the message with his first name as well as his wife's name, the filing said. Prosecutors said Rajaram's wife also had sought employment with the clerk's office, but county records indicate she was never hired.

Records obtained during the investigation show Rajaram had at least two in-person meetings with Brown, prosecutors said. In a December 2014 voicemail message left on Individual B's phone, Rajaram said that he and his wife had met with the "honorable clerk" and her husband and that his wife was "very happy," according to the filing.

"And what word you gave me, I told them," Rajaram said, according to the filing.

Now in her fifth term, Brown beat out two challengers in last year's primary even though the Cook County Democratic Party had dropped its endorsement of her after the public disclosure of the federal investigation.

Brown has repeatedly denied wrongdoing. In a 2016 interview with the Tribune Editorial Board, she said it's "impossible for me or anyone else to sell any jobs in that office."

But she has denied Tribune requests for copies of subpoenas related to the federal probe, saying they are not subject to state open records laws.