MONTREAL—Joé Juneau spent a lifetime learning about teamwork and determination as a collegiate hockey player, an aeronautical engineering student and 13 seasons in the NHL.He has been trying to instill those same values in the Arctic villages... 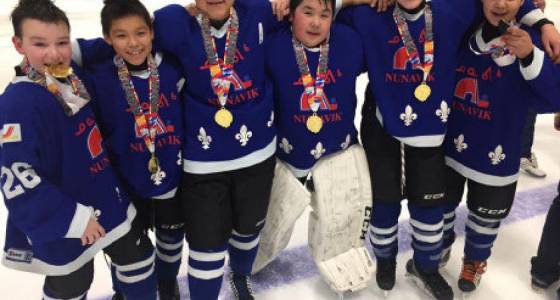 MONTREAL—Joé Juneau spent a lifetime learning about teamwork and determination as a collegiate hockey player, an aeronautical engineering student and 13 seasons in the NHL.

He has been trying to instill those same values in the Arctic villages of northern Quebec with a hockey program aimed at keeping Inuit youth on a path clear of the hazards of boredom, unemployment, addiction and crime that plague the region.

Launched in 2006, the Nunavik Youth Hockey Development Program established local leagues for young people in each of the region’s 14 villages, employed local “hockey trainers” to teach the skills of the sport and formed select teams made up of the best players to compete in tournaments in the south, often with remarkable results.

But in the last few weeks, Juneau, whose NHL career included stints with the Boston Bruins, Washington Capitals and Montreal Canadiens, has been learning a hard lesson about losing.

Last fall the hockey program received a YMCA Peace Medal for a decade of “motivating young people to surpass themselves on the ice and in the classroom.”

On Feb. 10, the program’s funding was cut, nearly in half. It has prompted anger, disappointment and even a motion in the Quebec legislature demanding the province step in with the money.

Leaders in Nunavik say the reaction highlights the cultural disconnect between the north and south. But some locals say the affairs only exposes the petty political squabbles and turf wars that risk depriving the youth of the skills, confidence and purpose to help their communities in the future.

“Nunavik is a big territory, but in a way it’s a small place,” Juneau said.

The official reason for the funding cut is that the hockey program became too focused on forming athletes and winning tournaments rather than keeping kids in school and out of trouble, said Jobie Tukkiapik, president of Makivik Corporation, which oversees Nunavik’s financial interests and administers the $12 million crime prevention fund.

Of the $2.2 million for the hockey program, $875,000 pays for the operation of the Nunavik Nordiks, a select team whose travel and accommodations are fully covered. That portion of the funding has been eliminated for next season, but the local hockey leagues and a regional tournament will still receive money.

“When you see the breakdown of the numbers on what is spent on the selects that go down south it doesn’t hit enough of the target,” Tukkiapik said.

Juneau attributed the decision to pressure from other groups seeking crime-prevention funding and angry parents tired of seeing their children being cut from the Nordiks. Others say it stems from a rivalry between Kuujjuaq, the village that used to act as the Nordiks’ home base, and Inukjuak, where the program has run since 2015.

Retired Quebec judge Louise Otis was stunned when she heard the news. In her travels and meetings with aboriginal groups as far away as Australia and New Zealand, she had heard nothing but praise for Juneau’s hockey program.

“Even there, they talk about this remarkable initiative in the Canadian north,” she said.

Otis was already a supporter when Juneau’s name came up as a possible recipient of the YMCA’s annual Peace Medal last year. After examining the program, the jury approached him about accepting the award. Juneau refused unless he could receive it along with members of the community, Otis said.

Juneau’s insistence means that Tukkiapik, the Makivik Corporation president, is the one left justifying the funding cut as a unanimous decision despite the fact that he was among those celebrated for the program’s successes just a few months ago.

“I find it very curious knowing that for years they’ve been voting for this and now all of a sudden they’re voting against it,” Juneau said.

Whether the hockey program qualifies as a crime-prevention initiative is a matter of some dispute.

Amid the drug-and-alcohol-addiction programs, extracurricular school activities, prison visits, housing support and hunting and camping excursions for youth that share in the $12 million fund, Juneau’s hockey program is unique.

But Jobie Kasudluak Jr., who works at the arena in Inukjuak, said he has seen young people thrive after joining the program while others who drop out have fallen into lives of petty crime and theft.

Matthew Berthe, a local hockey trainer in the village of Tasiujaq, population 370, offers up his teenaged nephew as an example of the newfound drive he sees in program participants. Not only does the boy look forward to hitting the ice, but he also puts himself through a regimen of off-ice drills.

“I don’t think he would have done anything if the program was not available for us. He goes to the gym to get more fit,” said Berthe, whose daughter also plays on a select hockey team. “These little changes are happening, I think, because of the program.”

The anecdotes of those personally invested in the success of the select program were no match for a professional evaluation that underpinned the decision to cut funding.

After visiting seven communities, conducting 141 interviews and reviewing internal documents, the evaluators concluded the program was too expensive, it took kids away from school for too long, it did not reflect Inuit culture and it even resulted in instances where kids picked for the Nordiks were bullying others at school.

And Otis, the retired judge, also said there was a “clear” crime prevention link to youth sports activities.

“Everyone knows that. It allows them to channel their energies in a positive manner for a good cause. For sure it’s a way to keep young people away from drugs and that’s well known,” she said. “You don’t need a university study to tell you that.”

In the end, and despite a decade of work in Nunavik, Juneau believes there was a fundamental misunderstanding about why the elite hierarchy was built into the hockey program.

The blue-and-white Nordiks jersey was meant as a motivator to push kids in isolated villages with few recreational outlets strive for personal improvement. And those who made the select program were ushered into a program designed as an incubator for future leaders.

“The select program that they just cut . . . it was really about teaching and about forming people a lot more than about competing,” Juneau said. “The competition comes at the end. Before that, there’s so much teaching involved in it. For us, all along it was about a component that helps us to form people.”

Juneau is still grieving, while also adapting the program to focus more on local hockey. But he said he has also been asked by Inuit leaders in the region to help find new funding sources that would keep the Nordiks on the ice and allow youth to travel south for tournaments.

“Obviously, if they asked me that they know it’s important,” he said.

“I think the leaders have a job to do. It’s their children. We are working very hard for these kids and with these kids, but our job is not to chase money around.”