Former Sheriff Lee Baca said on tape that he knew nothing of a federal civil rights investigation into Men’s Central Jail until an FBI agent called him one August day in 2011 and told him that a cell phone used by an inmate-turned-informant had been... 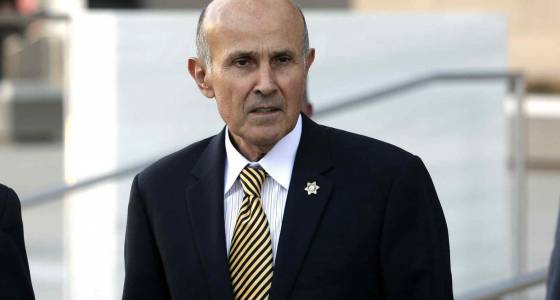 Former Sheriff Lee Baca said on tape that he knew nothing of a federal civil rights investigation into Men’s Central Jail until an FBI agent called him one August day in 2011 and told him that a cell phone used by an inmate-turned-informant had been confiscated.

But federal prosecutors on Monday zeroed in on those words by Baca, hoping to show through testimony that the ex-sheriff was lying and that he ordered those under him to hide the inmate/informant from the FBI and intimidate an agent because of the investigation.

Baca “asked us a lot of open-ended questions. Nobody had an answer,” former Los Angeles Sheriff’s Deputy Mickey Manzo said during the first full day of testimony in the second trial for the former sheriff, who has been charged with a trio of counts all connected to jail corruption.

Manzo said in a downtown Los Angeles federal courtroom that he had been to two meetings where Baca was present and the former sheriff knew that the FBI had managed to get a cell phone to inmate Anthony Brown, who was reporting abuse on inmates held in the jails.

Prosecutors hope Manzo’s testimony will set the tone for the trial, which will likely include all the same witnesses that appeared in Baca’s first trial. That one ended in a mistrial in December, when a jury couldn’t decide unanimously if Baca was guilty on the counts of obstruction of justice and conspiracy to obstruct justice related to a federal investigation in 2011 into inmate abuse at Men’s Central Jail. Some jurors told reporters afterward that prosecutors were unable to link Baca to the obstruction and conspiracy charges, which is why the panel was split 11-1 in favor of acquitting the former sheriff. Prosecutors decided to try the former sheriff again, but this time, they included a third charge of making false statements to investigators.

The new jury of four women and eight men, plus four alternatives heard opening statements on Friday, when prosecutor Brandon Fox outlined how Baca played the sheriff’s department against federal investigators as in a chess game. Baca, Fox said, instructed those under him to hide an inmate that had been talking to an FBI agent about abuse within the jails. Fox also argued that Baca worked closely with his undersheriff Paul Tanaka to obstruct the federal investigation. Tanaka is currently serving five years in federal prison in connection with the same jail abuse and corruption charges.

Baca’s attorney, Nathan Hochman countered that argument saying Baca had a good relationship with the FBI, and was disappointed the agency had not come to him first when they heard about inmate abuse. Baca, Hochman noted, had worked for the Sheriff’s Department for nearly five decades, 15 of those years leading the largest department of its kind in the nation. He oversaw 18,000 inmates and just as many employees. The prosecution based its case on testimony by a rookie FBI agent who allowed a convicted criminal to have a cell phone inside the jails, Hochman said, adding that the false statements in question were made by Baca during a nearly five-hour interview with investigators in 2013. Prosecutors asked Baca about 500 questions. Under cross examination by Hochman, FBI agent Justin Dalton testified that none of the interview was conducted on video.

Baca, 74, had pleaded guilty back in July to making false statements to investigators and he agreed to a plea deal of serving a six-month prison sentence. But U.S. District Court Judge Percy Anderson rejected the agreement Baca struck with prosecutors, saying a six-month sentence was too light.

The jail corruption scandal has so far resulted in the conviction and sentencing of several deputies and those higher in the Sheriff Department’s chain of command including Manzo who testifed Monday and Tanaka, who is not expected to testify.

Manzo is expected to return to the stand Tuesday for cross-examination by the defense.