When Mayor Rahm Emanuel got the City Council to approve his "people plazas" program in spring 2015, he envisioned it as a way to transform dozens of empty pieces of land and underused public spaces around the city into inviting places for Chicagoans... 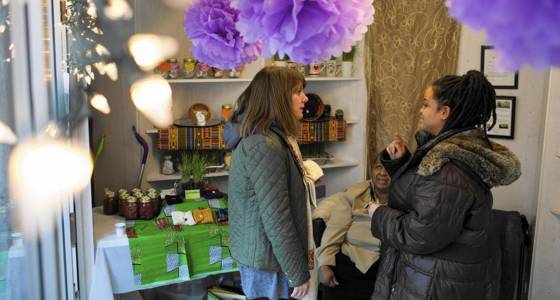 When Mayor Rahm Emanuel got the City Council to approve his "people plazas" program in spring 2015, he envisioned it as a way to transform dozens of empty pieces of land and underused public spaces around the city into inviting places for Chicagoans to meet up and hang out.

The parcels would get city money for physical improvements and greater attention to keeping them clean, along with occasional cultural installations like live music or art exhibits to draw people in. Companies would be allowed to advertise in the plazas, sponsor them or set up shop to sell food and coffee to raise money and eventually make them self-sustaining.

"Chicago is known as the 'City of Neighborhoods,' and the People Plaza Program is designed to create spaces where our residents can gather and celebrate the unique characteristics of their neighborhoods," the mayor said in a May 2015 news release. "The People Plaza Program sets the stage for local entrepreneurs, merchants and artists to take part in revitalizing communities across the city."

More than 18 months after the ordinance was passed and a local architectural design firm was awarded a contract to run it, the program is still struggling to achieve liftoff.

There have been a handful of events at some of the sites, a hodgepodge of properties big and small the city acquired over the years, many ending up with the Chicago Department of Transportation when streets were added to the grid and others were closed to traffic. But most have seen little or no activity. And the hoped-for permanent improvements like new benches or artwork have only been installed in a few spots.

At the time the City Council approved the plan, some aldermen expressed concern the plazas would get overcommercialized with advertisements. That hasn't been the case.

The people plazas program has generated about $8,000 in sponsorship money since its inception, and the majority of the 49 pieces of property around the city have seen no evidence of inclusion in the program, according to Department of Transportation records.

Mayor Rahm Emanuel's plan to use unspent property tax rebate money for parks, crime-fighting technology and other ideas hit a roadblock Tuesday as several aldermen said he should be focusing the cash more directly on anti-violence efforts.

The City Council budget committee did not vote on Emanuel's...

Mayor Rahm Emanuel's plan to use unspent property tax rebate money for parks, crime-fighting technology and other ideas hit a roadblock Tuesday as several aldermen said he should be focusing the cash more directly on anti-violence efforts.

The City Council budget committee did not vote on Emanuel's...

Aldermanic concerns that lower-profile neighborhoods would get less attention under the program appear to be more justified.

During the bidding process, the transportation agency called for 10 plazas to be "activated" in the first year of the agreement, and another 10 the second year. The paperwork said "the plazas should be managed and operated year-round and be activated during all seasons."

So far, events have been held in 17 plaza sites around the city, according to reports the firm hired to run the program provided to the Department of Transportation. There were dance routines involving local teens at several of the spots. A DJ played in a plaza on the Far Southeast Side, in Little Village on the Southwest Side and elsewhere.

The kind of permanent "capital improvements" envisioned in the city's plan have only been made at three sites. Two of them are "pop-up" stores called Boomboxes that are decorated versions of metal shipping containers that freight trains carry. Those are at plazas in Wicker Park and next to the Whole Foods in Englewood. There's also a mural reading "You Are Beautiful" at a plaza in Chinatown.

Mayor Rahm Emanuel on Wednesday used a City Council resolution that denounces anti-Semitic threats to say President Donald Trump should take a strong stance against attacks on people for their ethnicity, religion or sexual orientation.

"I think it's imperative for all of us — most importantly for...

Mayor Rahm Emanuel on Wednesday used a City Council resolution that denounces anti-Semitic threats to say President Donald Trump should take a strong stance against attacks on people for their ethnicity, religion or sexual orientation.

"I think it's imperative for all of us — most importantly for...

Meanwhile, a site at the intersection of 100th Street and Ewing Avenue in the 10th Ward on the Far Southeast Side was removed from the first set of plazas to be activated after the "community partner completely dropped out of the picture and voided the contract to produce objects and events on the plaza," according to reports to the city.

Last year, there were 56 events, and 11 of the 17 plazas that hosted an event had just one or two over the course of the year.

In the scheme of Emanuel's efforts to remake the city at street level into a more pedestrian- and bike-friendly environment with a lot more advertising and private investment, this one is fairly small-scale.

The initial outlay to Latent Design was $50,000. The city has since added $38,600 to the company's budget to help pay for possible future programming. The company also received a separate budget of $75,250 through the city Department of Planning and Development to build the pop-up store near the Whole Foods in Englewood, said Mike Claffey, Transportation Department spokesman.

There hasn't been any revenue sharing with the city, according to Claffey, who also said Latent Design founder Katherine Darnstadt hasn't recouped her costs.

Claffey called the program an ambitious one "with a very modest investment of public funding." He also argued Darnstadt should get credit for initial steps to try to grow the endeavor. "What she's doing is hard, trying to build community involvement in these programs," Claffey said.

Reached by phone, Darnstadt referred questions about the program to the city.

Latent has used $11,000 from the people plazas budget to pay for cultural programming at the plazas, and was paid an additional $28,000 by the city planning department for setting up the Englewood boombox, Claffey said.

Groupon paid $3,000 in sponsorship money for the mural in the Chinatown plaza.

Deeplocal, the company that makes Nest thermostats, paid $4,000 to hold promotional events at the Polish Triangle plaza in upscale Wicker Park and at a plaza location near the Chicago Board of Trade downtown, Claffey said. And a furniture company paid $250 to lease space for 10 days in 2015 in a second Boombox store built by Latent at Mautene Court, another Wicker Park plaza.

The Englewood pop-up store was put together on a piece of land next to the Whole Foods store at 63rd and Halsted streets, a project Emanuel frequently has promoted as evidence of his commitment to addressing the dearth of grocery stores in some African-American neighborhoods. The mayor named Englewood in 2013 as one of seven neighborhoods that would get heavy investment as "opportunity areas."

The people plazas program is the latest of the mayor's attempts over the years to use public assets to make money or bring services to city neighborhoods to be met with mixed results.

Shortly after taking office, Emanuel sought to raise about $25 million to help balance the city budget by allowing companies to advertise on Chicago's iconic downtown bridges. That program went nowhere, and the administration eventually dropped it.

The corporate-backed Get IN Chicago youth anti-violence foundation Emanuel launched with much fanfare in 2013 has fallen short of its mission to use social science techniques to find and fund programs doing the best work to quell the city's bloodshed.

And Emanuel's initiative to bring fresh produce to underserved neighborhoods in buses foundered when the company running it reported more than $200,000 in losses in 2011 and 2012. The mayor relaunched a version of the Fresh Moves produce program in 2015, and it added a second bus late last year.