An 18-year-old Elsie Allen High School senior remained hospitalized Monday on life support, one week after being injured in a high-speed crash that killed the man’s cousin, according to Santa Rosa police. Ricardo Banda-Marin has been in intensive care since... 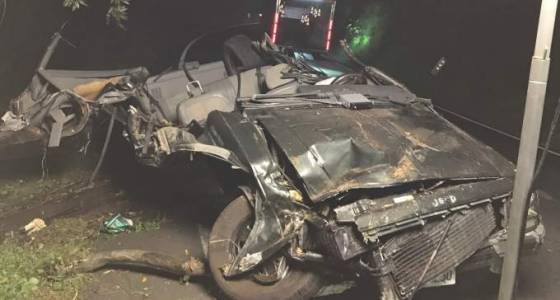 An 18-year-old Elsie Allen High School senior remained hospitalized Monday on life support, one week after being injured in a high-speed crash that killed the man’s cousin, according to Santa Rosa police.

Ricardo Banda-Marin has been in intensive care since Tuesday’s Montgomery Drive crash. He suffered life‑threatening injuries and has been on life support, said police Sgt. Summer Black. Banda-Marin was riding with his cousin, Cesar Rosales Marin, 22, heading west toward Santa Rosa, when they crashed about 6:15 p.m.

Skid marks at the crash site and the severe wreckage from the impact indicate Marin was driving well over the 40 mph speed limit, Black said. He lost control on a sweeping curve along the narrow, two-lane stretch near Spring Lake Park. His Jeep Cherokee ran off the road, dropped down a steep embankment and collided with a tree. The impact sheared off the vehicle’s roof.

Marin, a Santa Rosa resident, died in the crash. The unconscious Banda‑Marin was taken from the wreckage by Santa Rosa firefighters and carried up the embankment to an ambulance.

She said he was enrolled at Midrose, Elsie Allen’s small alternative high school on campus. Banda-Marin was expected to graduate June 2 and was planning to attend Santa Rosa Junior College, she said.

“He knew he wanted to graduate and recently turned the corner to make that happen,” she said.

Officers still were waiting for toxicology results to determine if the driver had been drinking or was under the influence of drugs.

This was the second serious crash on the same curve in less than two months. While there are guardrails in the area, there aren’t any where the crashes occurred. On Feb. 14, a Santa Rosa woman heading in the opposite direction became distracted, drifted into the opposite lane and struck two vehicles. Her car went down the embankment and became jammed in the fork of a tree. No one suffered serious injuries but police and fire officials said the initial driver was extremely lucky to have walked away.

You can reach Staff Writer Randi Rossmann at 707‑521-5412 or randi.rossmann@pressdemocrat.com.