Galleries Videos CONTACT ADVERTISE
Famagusta 36°
few clouds
BUSINESS EDUCATION ENTERTAINMENT HEALTH POLITICS SCIENCE SPORTS TECHNOLOGY
12:08 Guide To Online Sports Betting: How To Choose A Sportsbook
08:28 What Are Some Reasons to Consult a Brain Injury Lawyer?
09:24 Blockchain Solutions for Enterprises: How To Increase Efficiency And Profitability
07:06 How To Deal With A Car Crash In New York
17:43 Tips to keep in mind while choosing the casino site
11:34 Relation Between Employee Theft and Pre-employment Screening Check
04:37 Search your own desired site to play sports for betting
18:00 Top 3 Career Path Options for Business Analysts Preview
15:35 The history of Imen Jane, who is the influencer and the charges on the...
18:48 Sebastian Vettel's Greatest Races
BIST
1127
GOLD
475.620
USD
7.8283
GPB
10.0942
EUR
9.1544
Breaking News
Top 3 Career Path Options for Business Analysts Preview
Close

Elgin firefighters and residents were honored for their quick thinking and efforts to save lives in the past year.There were several instances last year when crews of firefighters -- honored with the department's highest award, the Phoenix -- helped bring... 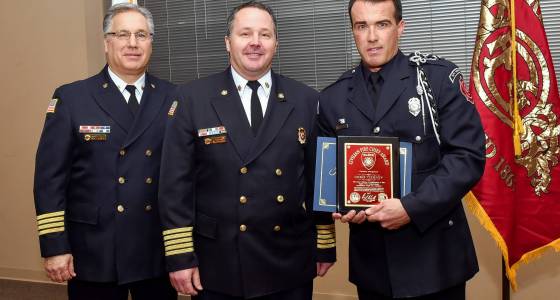 Elgin firefighters and residents were honored for their quick thinking and efforts to save lives in the past year.

There were several instances last year when crews of firefighters -- honored with the department's highest award, the Phoenix -- helped bring back to life patients who were in full cardiorespiratory arrest. While that may be part of firefighters' jobs, it's important to recognize positive outcomes, Fire Chief Dave Schmidt said.

"It kind of sets the bar of what we try to achieve," he said, "celebrating those successes that we do have."

Two residents whose lives were saved attended the ceremony last week at the Centre of Elgin and were given keychains marking the date and time of the events, Schmidt said.

"So often we work on these people and we never see them again," he said. "It's very cool to have them come. Very emotional."

The fire chief's award went to a team from Mathers Clinic who helped a woman unexpectedly deliver a baby, as well as off-duty Streamwood firefighter Chris Tierney, who helped in a March accident involving an overturned limo on I-90, when a woman died.

• Edier Fernandez, a laundromat employee who extinguished a dryer fire.

• Mary Richardson, who called 911 and performed CPR on her boyfriend until paramedics arrived.

• Four-year-old Sebastian Reyes alerted his mother and siblings when he smelled and saw smoke coming out of the basement in May.

• Four members of St. Thomas More Church, including Fire Lt. Chris Clausen, performed CPR and used an automated external defibrillator to save the life of a priest who collapsed after Mass in August.

Firefighters were honored for performing CPR on a patient who was stricken while on the roof of a home and for a lengthy extrication of victims after an SUV drove into the rear of a semitrailer on I-90 in August, when Michigan nurse Susan Walthall, who was driving by, also helped.

Fire crews in August revived a man who crashed his bicycle and landed on railroad tracks, severely injuring his neck.

Hoffman Estates firefighter Evan VonQualen called 911 after seeing smoke come out of a house and helped a resident get outside.

Streamwood firefighter Eric Casey pulled a man out of a burning car after an accident in December on Route 20; the man later died from his injuries.