U.S. Sen. Tammy Duckworth said she is willing to work with the Trump administration on infrastructure spending, but federal aid has to consist of more than tax credits to private investors who pony up for public projects.The new senator, who met with transportation... 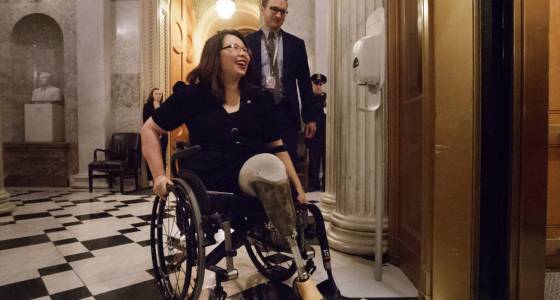 U.S. Sen. Tammy Duckworth said she is willing to work with the Trump administration on infrastructure spending, but federal aid has to consist of more than tax credits to private investors who pony up for public projects.

The new senator, who met with transportation and local elected officials in Chicago on Monday, said that she is not the kind of Democrat who would refuse to cooperate with the Republican president. She said if President Donald Trump comes forward with a "decent" infrastructure investment plan, she will work with him and make sure money comes back to the state.

Trump told a group of governors on Monday that he would make a statement about infrastructure in his Tuesday night address to a joint session of Congress. His campaign had discussed a $1 trillion, 10-year infrastructure investment plan, with private investments spurred by tax credits.

Duckworth said that this would not work for projects like fixing potholes and rural roads, which do not create big returns for investors. Referring to Trump's promise to "send in the feds" in response to the city's murder rate, Duckworth said she wished the administration would define this as sending in federal dollars, rather than the National Guard.

"If they truly want to help Chicago, then they need to make these investments in the economic opportunity and economic vitality in this city," Duckworth told officials at the downtown meeting Monday morning.

Duckworth said she is willing to discuss public-private partnerships, but there has to be a multi-prong approach to infrastructure funding that includes low-cost federal loans and direct funding.

She emphasized the importance of the Chicago Region Environmental and Transportation Efficiency or "Create" program, a partnership among the state, the federal government, the city, Metra, Amtrak and freight railroads to unknot the rail system by taking trains out of the way of other trains and car traffic.

The problem of freight congestion in Chicago is hurting the entire country's economy, Duckworth said. She noted that southeastern states buy corn from Peru because it's cheaper than buying it from Illinois, because of transport problems.

"To be the greatest nation on the face of the earth and have the slowest trains and not to be able to just transport corn and soybeans from the heart of the country to another part of the country is just ridiculous," Duckworth said.

White House budget officials outlined the information during a telephone call with reporters given on...

White House budget officials outlined the information during a telephone call with reporters given on...

The White House on Monday said Trump's upcoming budget will propose a $54 billion increase in defense spending and cuts to domestic programs and foreign aid.

Duckworth, an Iraq war veteran, said she wants to give troops what they need but the military is not the "sole source of the nation's strength."

Among the officials meeting with Duckworth on Monday was state Sen. Martin Sandoval (D), head of the transportation committee. He said transportation needs to be made a national priority.

Metra CEO Don Orseno told Duckworth the agency needs long-term, sustainable capital funding, noting that Metra last year had to cancel an order of 367 rail cars because funding did not come through. He said the agency needs $1.2 billion a year to bring the system to a state of good repair.

"We need to get our arms around this," said Orseno.