A Detroit judge threw the mother of a drunk driver out of her courtroom and into the slammer for laughing during a victim’s statement about the man her daughter killed while driving drunk last June.Amanda Kosal, 25, was waiting to be sentenced Thursday... 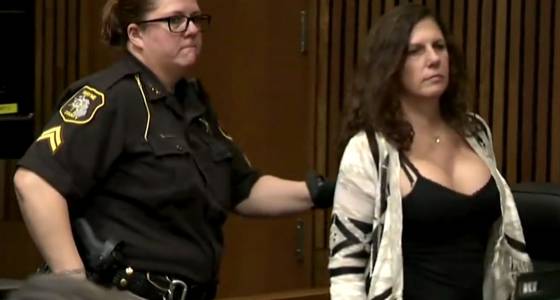 A Detroit judge threw the mother of a drunk driver out of her courtroom and into the slammer for laughing during a victim’s statement about the man her daughter killed while driving drunk last June.

Amanda Kosal, 25, was waiting to be sentenced Thursday for the crime that killed Jerome Zirker, a father of five, when her mother, Donna, and her boyfriend laughed and smiled during a victim statement from Zirker’s sister, according to WDIV Local 4 in Detroit.

Judge Qiana Lillard wasn’t having any of it and ordered the boyfriend out of the room, calling him a “clown.”

“It’s time for him to go … Whoever can sit here at a tragic moment like this and laugh and smile when somebody has lost a family member, I mean the entire time that Mr. Zirker’s sister was speaking, that clown, and that’s what I am going to call him, a clown, was sitting there smiling and laughing,” the enraged judge spat at the unruly audience member.

Donna followed her beau out of the courtroom and Lillard said, “You can go too because if you don’t know how to act, you can go to jail, so leave.”

Shortly after, Donna was brought back in and exchanged words with the judge, who sentenced her to 93 days in jail for contempt of court.

“Take her, she’s going in the back,” the judge said to the bailiffs.

“Anybody else wanna go? You can go, too.”

Donna could be heard off camera saying something about the judge’s mouth, to which the judge replied, “Oh, my mouth? Well, thank you, your mouth got you 93 days.”

She addressed the rest of the family members still sitting in the audience.

“These are very serious matters. I understand that you all are very upset because your loved one is going to prison, but guess what, she’s going to prison for the choices that she made. These people are here grieving, saddened because a senseless act took away their loved one and you’re sitting here acting like it’s a joke?” Lillard said.

“I deeply apologize for what I did. I was under a lot of stress,” Donna groveled to the judge.

Lillard was sympathetic and cut her sentence by 92 days and set her free.

“What you have to understand is as hard as this is for you to see your baby going to prison, imagine what that family feels like when their child is dead. I hope that you learned a valuable lesson from this,” Lillard said.

Donna’s daughter was sentenced to three to 15 years in prison for the deadly crash last summer. She admitted she was drunk when her vehicle crossed the center line and she slammed into an SUV head-on, killing Zirker and severely injuring his fiancée, Brittany Johnson, who was also in the car.