The man who slammed his pickup truck into 32 people at one of New Orleans’ biggest Mardi Gras parades had a blood-alcohol level nearly three times the legal limit, authorities said Sunday.Neilson Rizzuto — a 25-year-old bouncer at a local daiquiri bar... 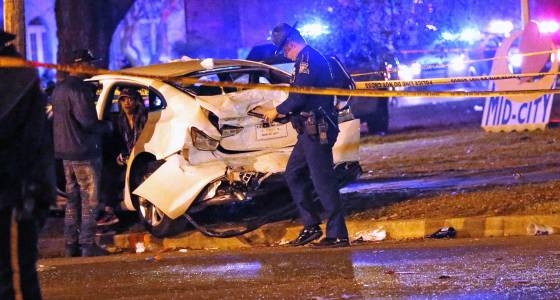 The man who slammed his pickup truck into 32 people at one of New Orleans’ biggest Mardi Gras parades had a blood-alcohol level nearly three times the legal limit, authorities said Sunday.

Neilson Rizzuto — a 25-year-old bouncer at a local daiquiri bar — appeared to have become angry over being stuck in traffic when he plowed his grey Chevrolet into the crowd of revelers around 6:45 p.m. Saturday, witnesses told the Times-Picayune newspaper.

“He sped up, and he lost control and you could see was getting ready to turn, and I knew he was going to run into all those people,” said a bystander who was watching the Krewe of Endymion floats at the time.

Another witness, Trey Klechak, said, “There were bodies flying off the hood while he was still driving.”

Rizzuto registered a .232 blood-alcohol concentration after the crash. The legal limit while driving is .08.

The crash injured 28 people, five critically. The victims range in age from as young as 3 or 4 years old to adults in their 30s and 40s, according to authorities. One was an on-duty cop.

None of the injuries are life-threatening, authorities said.

Rizzuto was slapped Sunday with two charges of first-degree vehicular negligence, hit-and-run driving and reckless operation of a motor vehicle.

New Orleans Police Superintendent Michael Harrison said there is no evidence that the crash, which occurred in the neighborhood of Mid-City, was an act of terrorism.

Still, the FBI in New Orleans said its agents were “coordinating with our federal, state and local law-enforcement partners to determine whether a federal violation has occurred.”

Rizzuto’s 4×4 pickup truck smashed through two cars before mowing into the crowd.

Photos released Sunday showed the disheveled driver, sweaty and clad in a maroon shirt, on the ground and in cuffs.

“He just seemed kind of out of it,’’ Kourtney McKinnis, 20, told the New Orleans Advocate.

The suspect’s grandmother, Loretta Rizzuto, told the Times-Picayune that she didn’t know him to have a drinking problem.

“He’s a very good worker,” she said. “He got in trouble once before, a little minor thing, I think. Riding a bike too fast or something like that. Nothing major.

“The people that were hurt, are they all right?” she asked.

“I’m just going to say my prayers. I want everything to be all right in this world.”