The Skyway Senior Center, a downtown Minneapolis hub that's served seniors from all walks of life for more than a decade, is once again preparing to close its doors.The center has enough money to stay open through the end of March, said Patty Bowler, director... 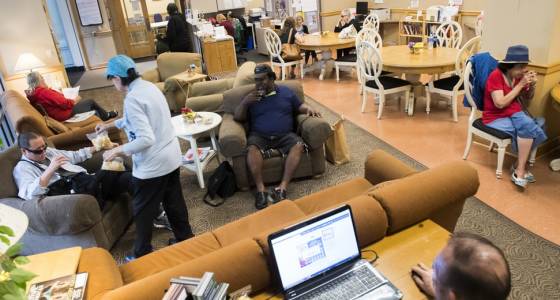 The Skyway Senior Center, a downtown Minneapolis hub that's served seniors from all walks of life for more than a decade, is once again preparing to close its doors.

The center has enough money to stay open through the end of March, said Patty Bowler, director of policy and program development at the Minneapolis Department of Health. Without someone to pay for its operations, it'll close.

"We have been trying to keep it afloat for a while," Bowler said.

The senior center's fate has been in question since 2015, when it lost longtime sponsor UCare. In October, Shoreview-based senior home operator Ecumen expressed interest in taking over operations, a role held by the city health department. But last week, after spending a few months trying to figure out how to pay for needed upgrades, Ecumen decided against it.

In a letter to Bowler on Feb. 22, Ecumen staffers said the decision was made "after careful analysis and considerable deliberation."

Ecumen wanted to find a sustainable funding model and make significant improvements to the center, rather than simply maintaining the status quo, the letter said.

Improvements would have included more staff and programming for seniors who visit the center, said Ecumen spokesman Ben Taylor. It would have likely required the $185,000 annual operating budget to at least double, according to the Feb. 22 letter.

In the 120 days Ecumen had to make a decision about taking over the center, there wasn't enough time to find the necessary funding, Taylor said.

"Nobody here wants to see that center close," he said. "And we certainly hope that there's another short-run solution."

Located behind the Nicollet Mall Target store, the center serves more than 70 adults over the age of 50 every day, with activities from fitness classes to educational lectures. Since opening in 2001, its funding has come from external sources including private donations.

Money has shown up at the last minute before. Last year, an Edina couple donated $50,000 after learning about the center's financial troubles.

The City Council's Health, Environment and Community Engagement Committee heard an update on the center's expected closure at a meeting Monday. Committee Chairman Cam Gordon noted the possibility of a solution emerging in the next few weeks, but lamented the current situation.

"It's too bad," Gordon said. "I think this is a loss for the community."