CLEVELAND -- It's a dark place, Donald Trump's America.   A place where a talented Indian immigrant is gunned down solely because he looks a bit different than most of us.   Where anyone who isn't a white Christian has a right to feel threatened... 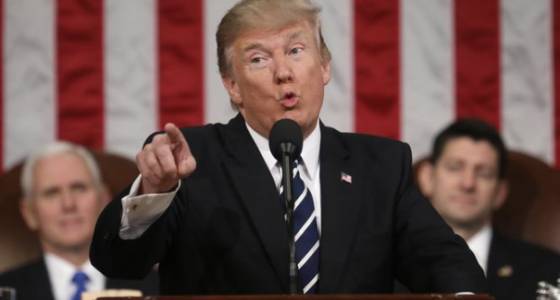 A place where a talented Indian immigrant is gunned down solely because he looks a bit different than most of us.

Where anyone who isn't a white Christian has a right to feel threatened and afraid.

Where the son of one of the most revered athletes this country has ever produced is detained by immigration agents for nearly two hours at a Florida airport. Muhammad Ali Jr. was interrogated solely because his name is Ali and skin isn't as fair as the president's.

Now, Trump wants us to fall for a few soothing words in a speech. But only a sucker will take that bait he tossed out Tuesday night in a speech to Congress.

Trump is a con man. He ran and won a two-year campaign designed to tear America apart. He has a record of discrimination allegations dating back nearly a half century.

And, maybe worst of all, this shallow man who now lives at 1600 Pennsylvania Avenue spent five years trafficking in one of the most racist and vile lies ever told about a person of color.

Trump has dropped the birther lie about Barack Obama from his tiny vocabulary. And none of the above is to suggest he invented hate crime.

But hate crimes become more likely when, through his word and deeds, a man in Trump's position uses language suggesting many or most people entering this country are terrorists or criminals who want to steal our jobs.

Hate crimes become more likely when a winning candidate for president relies on words that incite such violence and venom they make him a hero among white supremacists and anti-Semites.

The president's reading of a few lines from a piece of paper doesn't alter his status as the most significant threat to American democracy since the Civil War. And anyone who believes differently is living in la-la-land.

Or, as Dana Milbank wrote in Tuesday's Washington Post, Trump and his followers have proven Abraham Lincoln wrong: "You can fool 37 percent of the people 100 percent of the time."

Trump didn't scream "get out of my country" before killing Srinivas Kuchibhotla in cold blood as the engineer and another friend from India sat minding their own business Feb. 22 in a Kansas bar.

But, to borrow a Watergate term, his hateful language about the need to toss people "out of the country" might as well have made him an unindicted conspirator.

More than anything else, plummeting approval ratings probably explain Trump's decision to dial down the hate speech Tuesday.

The lies are taking their toll. And his lies about and grievances against the news media have now escalated into all-out war.

Readership and revenue at The New York Times and Washington Post are soaring.

After Trump described Vanity Fair as a dying magazine, subscriptions surged an astonishing 80,000.

Vanity Fair, the monthly magazine owned by the parent company of Cleveland.com and The Plain Dealer, refers to itself as the "magazine Trump doesn't want you to read."

But Trump's real war is with the American way of life.

And his accomplices are many. The vast majority of Republican members of Congress undoubtedly know Trump isn't quite right, that his brand of nationalism is actually decidedly un-American.

In a Congress awash with cowards, Ohio's representatives are at or near the top of the pack.

Years from now, grandchildren and great-grandchildren of those congressmen and senators will be appalled and ashamed to learn one of their ancestors was complicit in Trump's effort to destroy everything this country stands for.

Included in that group will be all 12 Republican members of the House from Ohio and, of course, Sen. Rob Portman.

As David Frum, former speechwriter for President George W. Bush, wrote in the March cover story of Atlantic Magazine: "We are living through the most dangerous challenge to the free government of the United States that anyone alive has encountered."

Like the president and his lackeys who run Congress, Frum is a Republican.   Unlike them, he has a conscience.

Brent Larkin was The Plain Dealer's editorial director from 1991 until his retirement in 2009.